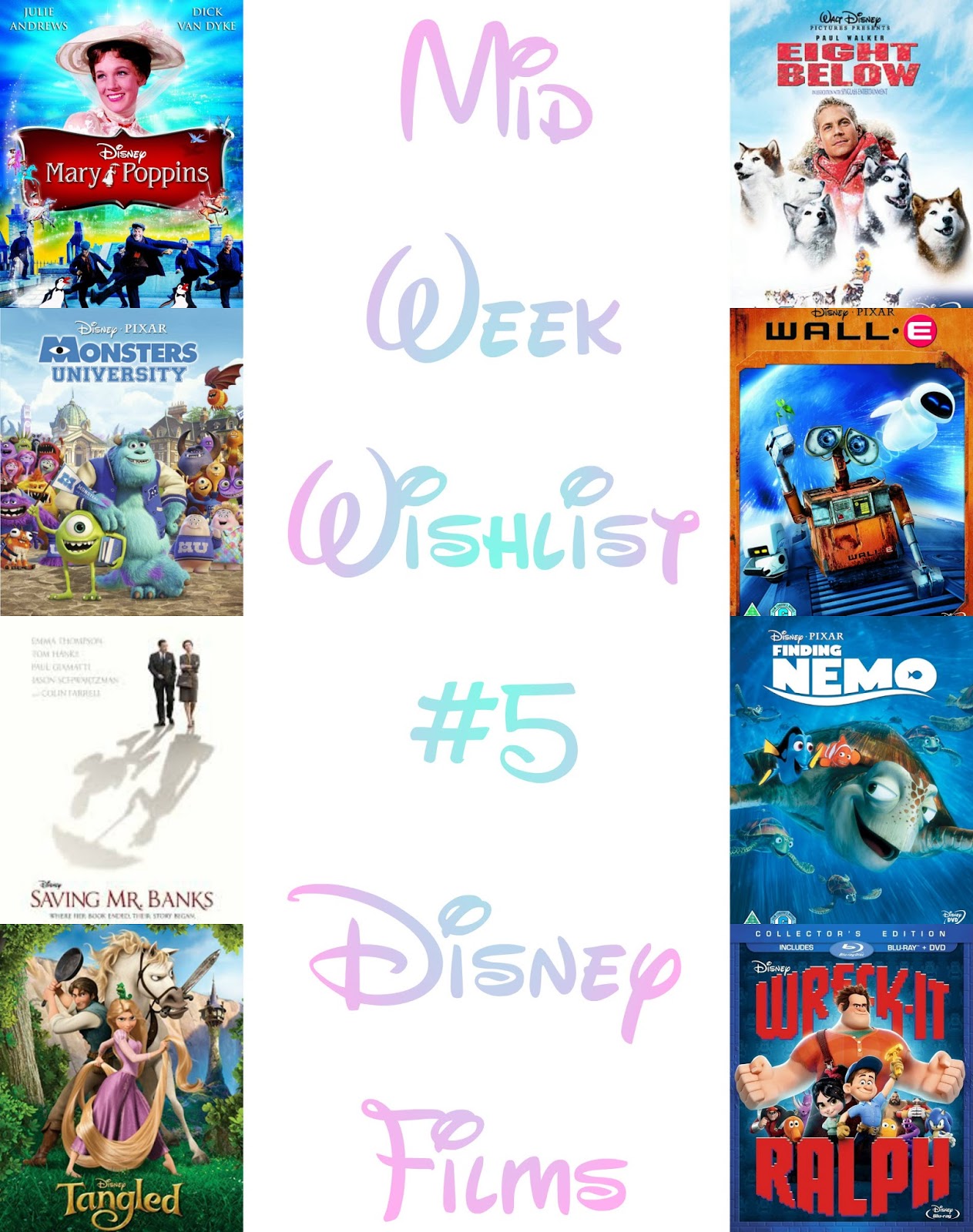 So for this week’s mid-week wishlist I gone down the Disney route now first of all who doesn’t like Disney?? I surely do I love watching Disney movies on the weekend & I’d happily stay in doors and watch them instead of going out especially if it’s a rainy day.

First of all is Mary Poppins I remember watching this as a little girl and believing that these types of nanny’s existed. I just loved the movie and I still love it to this very day. I like how it’s a combination of story telling and singing and I know pretty much every word of the songs. It’s an innocent movie compared to some of the films that are released nowadays and I really like that. It’s a great movie to watch with the family or by yourself and it always brings back happy memories when I re-watch it.

Although this film features the late Paul Walker as the main character it’s a film that truly shows how talented and amazing he was as an actor. This film actually made me cry and usually films don’t make me cry unless they’re really sad. I think that this film just made me cry because I watched it after he died. It’s a really great film and the story line is touching I’m pretty sure that it’s based on a true story although I’m not 100% sure. I defiantly recommend this film for dog lovers as it’s mostly about dogs and shows one mans true dedication to his dogs.

It took me a while to finally watch Monsters University and although it’s not as good as the first one I must of watched it about 100 times now (no lie). It’s still a funny and imaginative film to watch full of colour and I think the whole concept of it is ingenious. I love how they have shown how Mike & Sulley’s friendship began and how it developed into a life long one.

This film portrays how our planet could end up in the future and it shows it in a really creative way. I love how we are introduced to Wall-E’s character throughout the movie and find out how sweet and caring he is. I enjoyed the part of the film where they go to the spaceship and you see how all the humans are living on board. Some of the ideas that they have come up with are pretty clever like food in a cup and how they all have these chairs to go around on.

I have yet to see this film and I really really want to as it’s a film about one of my favourite childhood movies Mary Poppins. I’ve heard good reviews about the video as the main character is played by Emma Thompson who is a really talented actress. I love how the film also features Walt Disney’s original ideas as well. I love anything to do with Disney especially the parks which is featured a lot throughout this movie.

I remember watching the first 10 minutes of Finding Nemo and getting freaked out so I put it off for a while. After I overcame my fear of the first 10 minutes I found out how laughable and amazing the film was. I have to say my favourite character is Squirt the little turtle he’s pretty awesome and his voice is soo cute. I am beyond excited for Finding Dory which comes out in 2016 I’m eager to know whether it will be as good as the first one. I say this because sometimes sequels aren’t as good as the original.

I remember first watching this when it first came out with a group of friends and not taking any notice towards my friends but being completely focused on the film. Usually when you’re at a cinema with your friends you chat and discuss the film as it unfolds however this time I shut them off because I just wanted to watch the film. I loved how the whole story of Rapunzel  was explained in detail instead of the usual story it’s a really unique and lovely film full of romance, songs and friendship.

At first I was really unsure about this film however once I watched I thought to myself why didn’t I watch this sooner!! I love how Disney comes up with such great films that explain simple things in our everyday lives such as video games. The characters within this film have such individual characteristics that when are put together create an amazing film. It shows how bad guys aren’t always as bad as they seem and I think it’s a great life lesson for little kids that watch it.