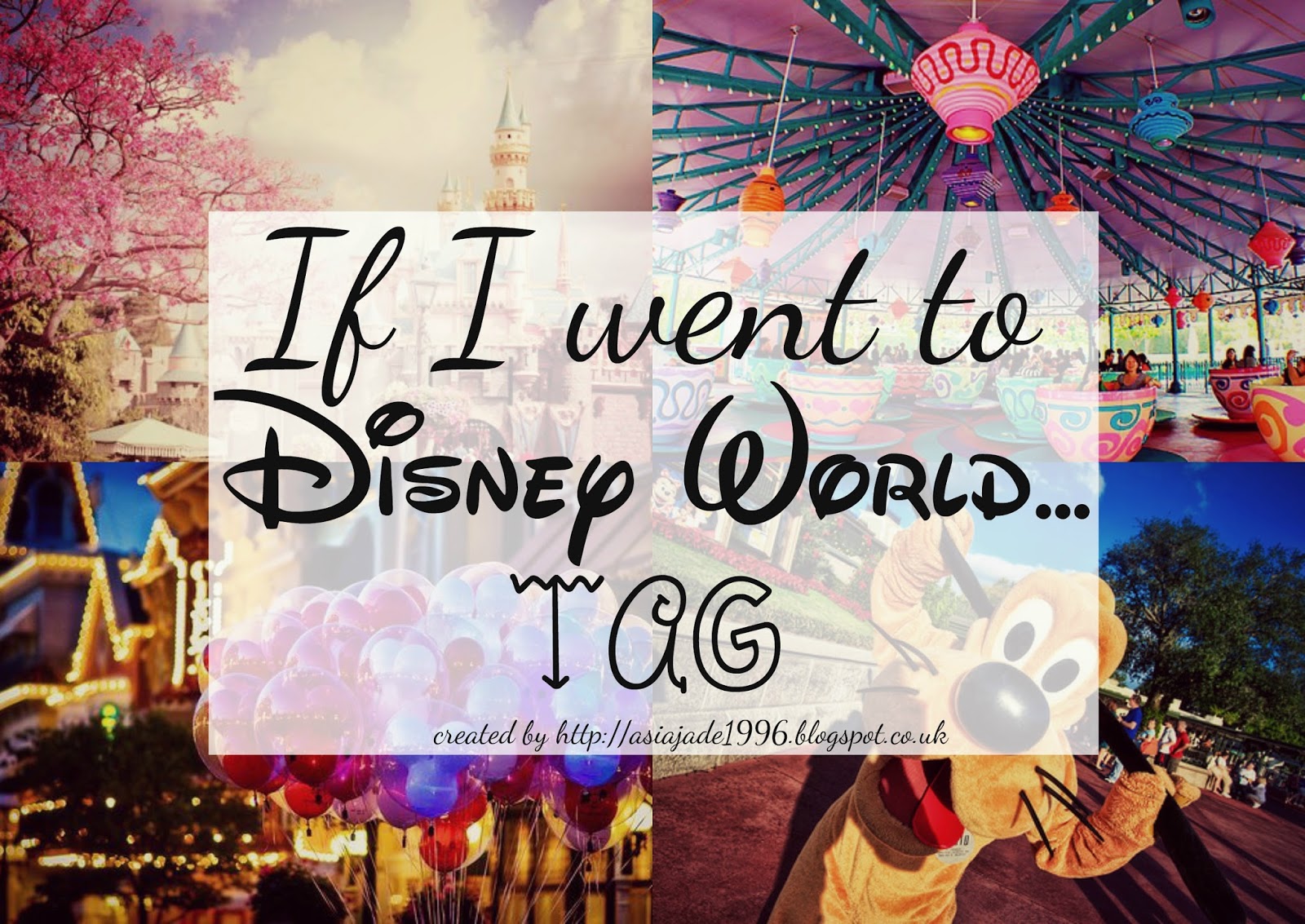 Hey guys so today I thought that I would create a TAG specifically for all you Disney World  lovers out there. I really love all things Disney the movies, songs, merchandise and resorts sadly I haven’t been able to go back to Disney World since I went when I was around 7.

As some of you might know if you follow me on my twitter I absolutely love watching Disney World Vlogs on YouTube and I could honestly spend the whole day watching them. I thought that I would create this TAG so that you guys can dream about going there like I do (Hey a girl can dream can’t she?!) I think that’s a really exciting TAG to do and I hope that you guys love it as much as I have creating it.

1.What time of year would you go & how long for?

2.Who would you go with and why?
3.Where would you stay and why?

6.One attraction that you HAVE to go on

7. Five things that you would lie to purchase whilst you’re out there

9. Would you vlog, take photos of your trip or both?

10. One place you would like to visit whilst in Orlando apart from Disney World?

1. For my first time there I would love to go when it’s the low season which is January-March. As it would give me a chance to really take in the whole magical experience without it being too crowded. I think two weeks would be a perfect amount as it gives you enough days to go to each park with days in between to chill out, shop and go to other attractions such as Universal.

2. I would probably be travelling with my mum or either just some friends depending on who’s available at that time. But if my friends couldn’t come then I wouldn’t mind going there with my mum she’s a great laugh and is fun to hang around with. It would also be great if I went with my friends as it would be a holiday away from home but I know if I went with friends I’d spend 10x more money than if I went with my mum because she would make sure I spread my money out.

3. Disney’s Old Key West Resort looks perfect for a first time visit especially if I was travelling with my mum as it’s not too child themed. This particular resort is one of Disney’s Deluxe villa resorts which means that each individual family get their own studio or villa. A studio would be just right for me and my mum as it has two single beds, a kitchenette and a bathroom they also come with a balcony which is always nice to have. All of the resorts have themed rooms but I really like the rooms at Old Key West as they’re not overly themed.

4. I personally prefer Magic Kingdom out of all of them as they have some of my favourite rides. When I go to Disney Land Paris Magic Kingdom never fails to disappoint it’s just so magical and filled with amazing people who are kind and polite. Don’t get me wrong I love all of the other parks too but Magic Kingdom is more me if I had to pick a park that described me.

5. Defiantly gentle rides like “the little mermaid” & “Dumbo the Flying Elephant” I don’t mind fast rides but I’m not a big fan of heights. I have been on “Big Thunder Mountain” before and it was really fun however I’m not sure if I have the guts to go on it again.

6. I would have to go on Test Track in Epcot although I just said I don’t really like fast rides this is a must especially if you haven’t been on it before. I always see people going on it in their Disney World Vlogs and it makes me want to have a go so badly.

7. Naming 5 things is quite hard as I just want to purchase all of thehm!! But here goes I’d have to purchase a mug of some sort as I love a good old cup of tea, defiantly something food related, a jumper of some sort, a photo taken by one of the park members and some Minnie Mouse ears.

8. I’d love to meet all of them however if I’m honest things like that freak me out a bit I really dislike wax figures and won’t really go near them I don’t mind characters as such but I’m still a bit weary of them. However I’d love to meet Winnie The Pooh (he’s my fave), Minnie mouse & Lilo.

9. I’m hoping that I would have enough courage to Vlog but if not I’d defiantly take hundreds of photos as I’d like to remember the holiday for ever. If I did vlog then I’d have to remind my self to (like by writing on my hand | it always works) because if I didn’t then I’d have like one clip per day which would be boring and useless haha.

10. I would have to visit Universal Studios as they have a Harry Potter part that I’d really love to see. Here in the UK we have the Warner Brothers Studios for Harry Potter but they have a train and rides which look fun. I’m a great fan of HP and it would be nice to visit there too and take lots of photos. I’d also love to go to the studios & islands of adventure in general as they have many attractions such as the Simpsons land & Dr.Seuss land.

So there you go there are my answers to the If I went to Disney World TAG that I decided to come up with. I hope you enjoyed answering these questions as much as I have and I hope that your wish to go to Disney World comes true in the near future or next couple of years. I’d love to see your answers so please leave a comment down below.