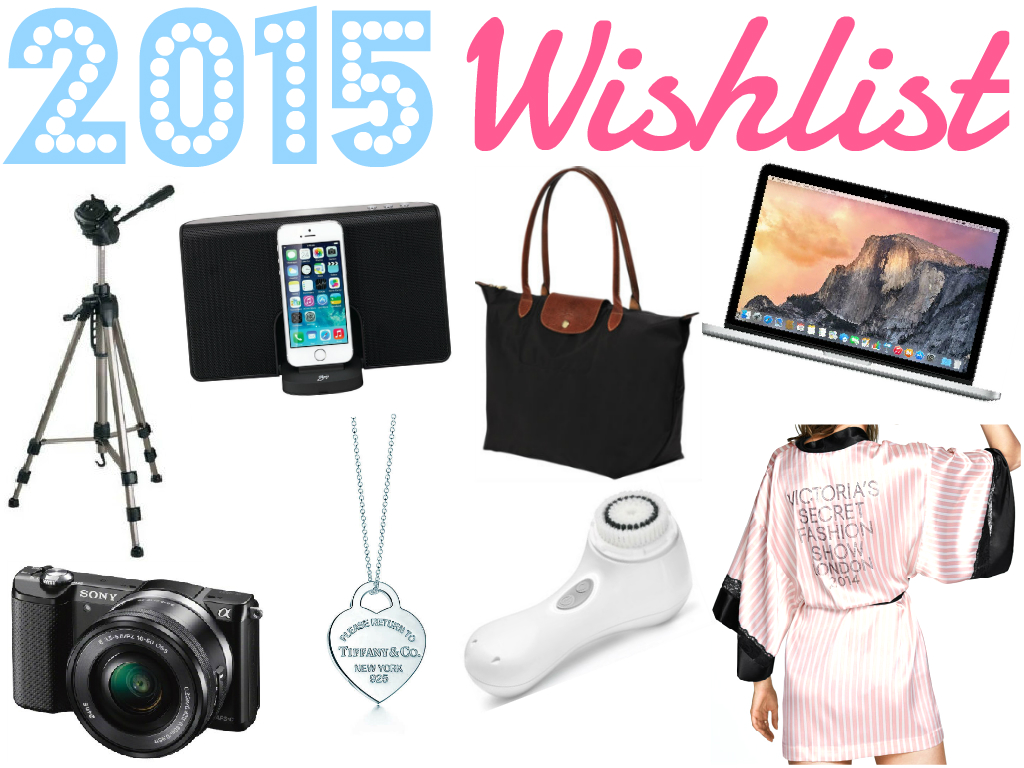 Hey all you beauties what better way to kick off 2015 than with a wishlist. I decided that I would put together a wishlist that I would like to purchase this year as it’s kind of a nice to have things which you can splurge on throughout the year. I hoped you liked this post and it gave you some ideas as to what you could splurge on this year.

You probably know for a long time now I’ve been using my iPad & iPhone to film my youtube videos & take photos for my blog on. These have both been absolutely fine however I would love to get this camera as it will produce a better quality video/photo which I think would improve the overall quality of my blog & youtube channel. It’s also a compact camera which means that it has all of the features of a big canon that youtubers such as Zoella & Fleur De Force use however it’s in a smaller version which makes it simpler to use.

As most of you have probably seen from my dream wishlist for blogging blog post originally I wanted to get the Manfrotto BeFree Compact Lightweight Travel Tripod. However I figured why spend over £100 on a tripod when you’ve never used one why not try a cheaper simpler one first. I saw this one which is only £13 and has a rating of 4 stars out of 5 on it’s reviews which sits happy with me.

I would love to purchase another one of these tote bags as they’re so useful to carry stuff around in. I’d also like to purchase more than one colour if possible as I’ve already got a turquoise one which I’ve used to death which is actually a fake one (hands up I brought it on holiday once). However it was really good quality and I love using it on a daily basis because they’re such light bags but you can also fit loads in them (kind of  like a Mary Poppins bag).

You also might already know that although I have lots of skin care products I’m kind of lazy about using them and I’m not one to stick to a routine daily. I’ll either do it in the morning or evening not both usually at night as I have more time and during the morning I’m normally in a rush to leave the house otherwise I’ll be late for sixth form. However I feel that if I got this it would speed up the daily skincare routine which might make me do it day and night!!

I don’t necessarily need these speakers because I can play music through my phone, laptop, ipad or TV. However my TV has an iPod docking station but not for an iPhone 5 so I can’t use it which is such a pain as I like to listen to music when I’m tidying up my room. I’d like to get these speakers as they look nice & sleek and they’re also such a reasonable price.

I used to have a necklace exactly like this one a few years ago that my friends all brought me for my birthday which was such a thoughtful gift. However since then we moved and I must of lost it in the process of moving because I never found I got quiet upset because it was a special present. That is why I’d like to get a new one also because I love simple elegant necklaces instead of big chunky ones as they can be worn with anything.

This item is one of those things that you really and I mean really don’t need as it will probably hang upon a hook somewhere and never be worn but you really really want it. Yes I’d love to purchase one of these Victoria Secret robes as they are gorgeous and it would defiantly make me feel like a VS model (…..joke a girl can dream right?). However I probably won’t end up buying it as it’s a pretty useless thing I’d love to wear it but not loads so that it got ruined tough decisions have to be made…

Last of all is this laptop which I’ve been wanting for ages mostly so that I can edit a lot easier as I usually use my ipad which is great and simple but limited. I’d also like to use the mac for editing, youtube/blog stuff & my homework and then use my other laptop the one I have now for computer games such as the sims 3 & 4. This is because the games will run more smoothly as there is less on the computer. Also the macbook will be the biggest splurge of 2015 if I end up getting it myself or if I get it for my birthday or from santa but who knows!!