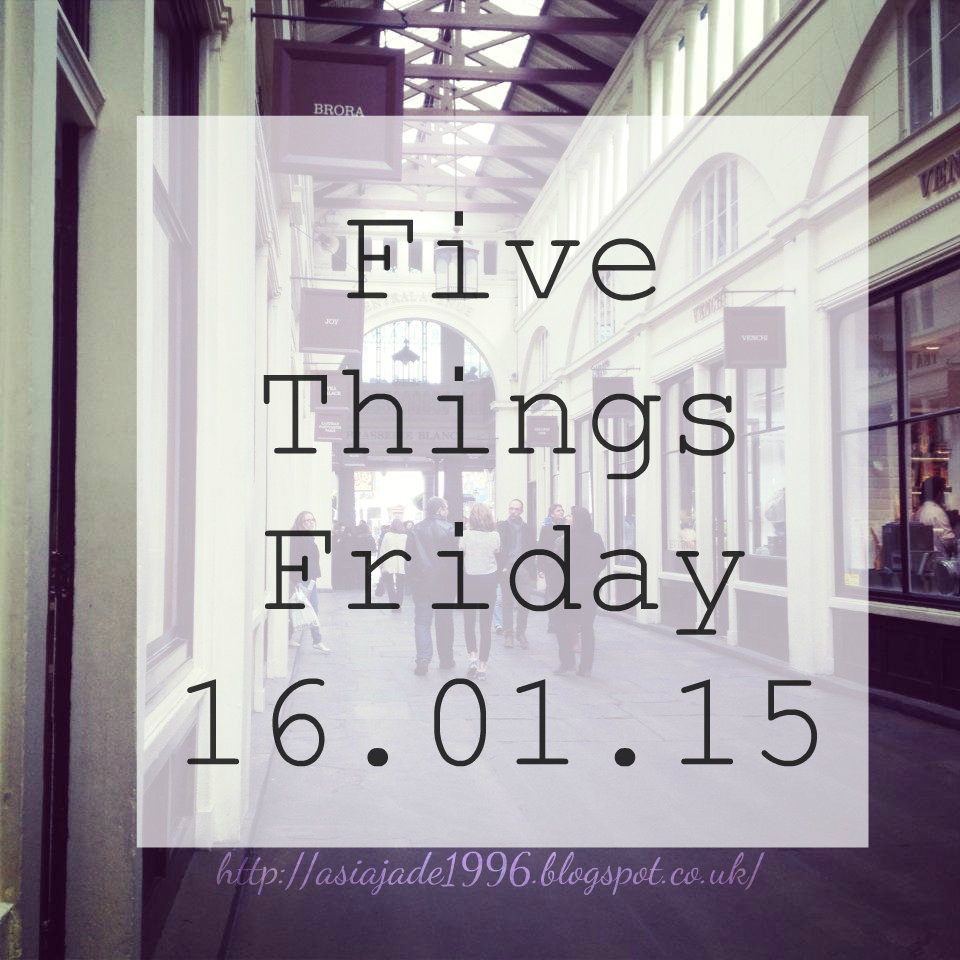 Hey guys so first of all I know that this blog post was supposed to go up yesterday but I was super busy yesterday. Anywaytoday’s blog post is going to be the startof a new series here on Asia Jade. So I thought that I would start this series called Five things Friday now it’s not like I just made it up myself I’ve seen many bloggers do exactly the same post but on their blog.

If you haven’t already guessed what it is then I’ll let the cat out of the bag every Friday I’m going to be looking back on my week and sharing with you guys five good things that happened that week. I think that it’s such a lovely way to keep a mini record of my life as you often forget those little things that happen on a daily basis.

One
This week I’ve chosen to walk to places instead of taking public transport. This meant that I walked when it was raining and sunny which made me remember how much I loved it. Just being able to take a walk by myself listening to good music and reflecting on the weeks events is a blessing in itself. Walking is a great way to clear your head and I’ve always enjoyed my own company. I must remind myself to choose to walk somewhere instead of getting on the bus or tube more often.

It’s been especially sunny here in London this week which has meant that taking a walk was much more appealing. However I do like taking walks in the rain as I feel you can think more (I know that probably doesn’t make very much sense) and collect your thoughts together better.

Two
I’ve been eating and drinking much healthier this week which I had planned on doing as I started the #28dayjumpstart on Monday. However I have now stopped doing it as I have found I just don’t have the time. I know that it doesn’t exactly take ages to prep everything but I’m just super super busy at the moment. I’m defiantly going to try it again at a later date just when I can focus on it completely. I really recommend it though as it’s a great way to have a set meal & workout plan all ready at your fingertips.

Three
I’ve been listening to my favourite singer songwriter all week which is Hunter Hayes. He is truly talented and he has also made me realise how much I love country music. I tweeted yesterday saying how “There’s something about country music that makes me feel amazing when I listen to it”.

I have really been enjoying listening to his album “Encore” without skipping to the next song that’s how good of a singer he is. His songs are always filled with emotion and truth one of his songs called “Invisible” is just amazing it’s even a little emotional at times as you can sense his feelings towards the themes of the song.

This week also marked the 19th birthday of one of my close friends which we celebrated the next day as I wasn’t in on that day. Some of her teachers allowed us to join them in celebrating it with some cake and cola which I thought was so thoughtful and sweet. It was a memory that I want to cherish as we all sang Happy Birthday and had a lovely time. Considering it was half way through a lesson my teacher allowed me and my other friend to leave the lessons for ten minutes to go and join the others which was pretty nice of him.

The last lovely thing that happened this week was having a relaxed Wednesday. I don’t have lessons on a Wednesday which means that I can stay at home and focus on schoolwork/blog/youtube/book stuff which I like. I love a good day at home where you can get things done so having one in the middle of the week is like having a pot of gold at the end of a rainbow.

I’m usually super busy mon-tues as I’m at sixth form then from thurs-sat I’m busy because I’m either at sixth form again or I’m working. Therefore my weekends are kind of split up between Wednesday & Sunday which makes having a day off mid-week more lucky and one to use as a get things done day.