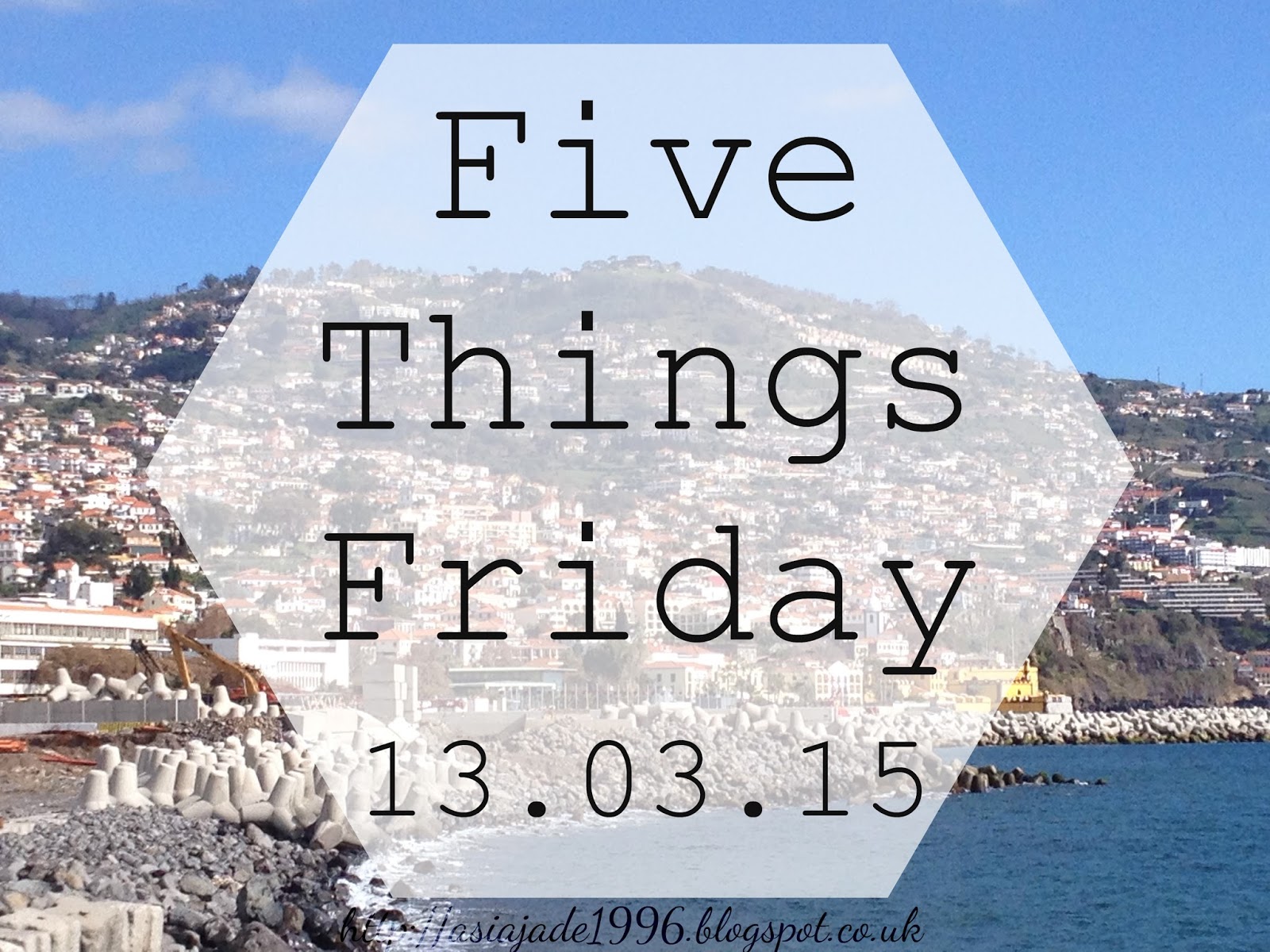 You may have realised that I haven’t uploaded one of these posts in a while (a month to be exact). I have had so much on my plate recently that I just haven’t remembered to. I’m not one of those perfect bloggers (if they even exist) sometimes I’ll just scrap blogging for the day and do other things as it’s ultimately my choice whether I upload or not. So sorry for not uploading but I’m hoping to do one at least every week or every other week from now on (no promises!!)

So I thought that I would start this series called Five things Friday now it’s not like I just made it up myself I’ve seen many bloggers do exactly the same post but on their blog. If you haven’t already guessed what it is then I’ll let the cat out of the bag every Friday I’m going to be looking back on my week and sharing with you guys five good things that happened that week. I think that it’s such a lovely way to keep a mini record of my life as you often forget those little things that happen on a daily basis.

The first thing that I am going to talk about this week is my driving lessons. This is because I’ve recently started learning with a new driver which was daunting at first but I soon settled into learning with someone new. It’s one of those things that everyone learns at one point or another in their life whether it’s when you’re 17 or when you’re 45.

When I first started with this new driving instructor he discovered that I had a lot of flaws in my driving as I had previously learnt before with someone else. This made each lesson frustrating for the both of us as I wanted to do more things than I had done with my old instructor where as my new one wanted to work on these flaws.

Turns out he was completely right and he said that if I worked on my bad areas that my whole driving would turn around and that I would become a really good driver. So each lesson consisted of me going back over my bad areas and re-training myself which was stressful to an extent for me. As I had to re-train my brain to learn the same things a different way in order to do them correctly and safely.

You are probably wondering why I am waffling on about driving well I decided to put driving lessons into this week’s five things Friday because this week I had a driving lesson that went really well. I think my brains finally learnt how to use the steering wheel properly (which was my biggest flaw) so with that in mind I was happy with this week’s lesson. So now that all of these bad areas are being fixed I may be able to pass around my birthday time which will be a year after I took my theory (fingers crossed!!).

The second thing that has made me happy this week is getting all of my coursework for two of my subjects which are completely coursework based sorted and completed. Well I say completed I still have one more unit for each subject to complete but that’s five out of six units done and dusted. If you do coursework based subjects then you will know how stressful it can be at times.

Although there’s always been that bravado between A-Level students and BTEC students. I have found that students who solely do a-levels think that us btec students are talking “crap” when we say how hard it can be at times. But this is true btec’s can be a huge handful at times as you have deadlines to meet whilst juggling many other things. I don’t think people realise how useful btec’s are as you pick up many skills from it such as time management and prioritising among many other skills.

The third good thing that has happened to me this week is that I 100% know what I want to do in the near future. I definitely want to do a higher apprenticeship instead of go to university. University just isn’t the right path for me so I wouldn’t want to spend all that money for nothing and drop out.

I’m not going to explain the whole story behind this because it’s pretty long. However the experience has made me realise that as one door closes another one opens. Which is so true I knew that at some point in my life an amazing opportunity would come around that I couldn’t take because of other commitments.

However I have now learnt that although that opportunity may seem amazing at the time it might have been an awful experience. So I guess you never know which opportunity is the right one for you. You just have to gamble one and see what happens (which is what I learnt this week). So now I know that there might be just as good an apprenticeship for me in September than the amazing one which was on offer this week.

I have the interior design bug. Every time I walk past a home ware shop I just have to go inside and have a look. I’ve been loving Tiger Tiger and Oliver Bonas they both do such reasonable home ware items. I brought such a beautiful cake stand from Tiger Tiger which I’m going to use to put some perfume bottles on (blog post or video coming soon).

The last thing this week is that I have really been interacting with you guys this week. I’ve also decided to set up my own collaboration YouTube channel (coming soon) which will mean that I get to interact with you guys even more. I love finding out why you read my blog or watch my videos it’s just amazing to see some of your responses. I’ve also been talking to a lot of people from all over the world this week which has been pretty cool.