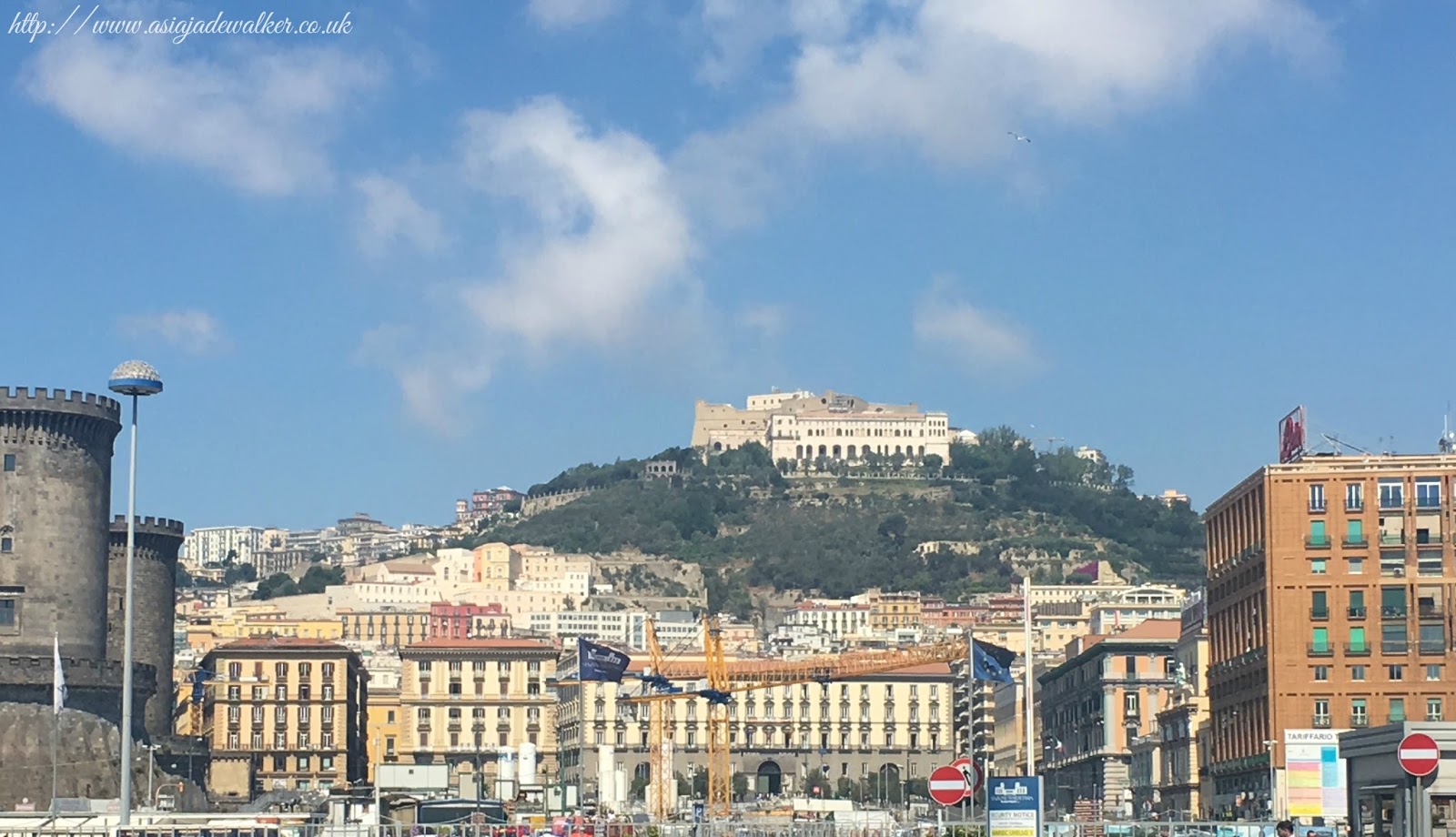 Hey guys I finally feel like I might be getting my blogging spark back….but let’s not place a bet on it just yet. Today’s blog post is the fifth edition to my holiday blog posts. If you’re sick of them then there’s only four more blog posts to go before I go back to normal blog posts. The first place that we visitied on our cruise was Naples (Italy). This was also very close to Pompeii which meant that we technically visited two places in one go haha.

We docked at about 7am in the morning but we weren’t allowed off the boat until around 8am. We didn’t actually leave the boat until about 11am after we had breakfast and gotten ready for the day. I really loved Naples as the docks over look the city. I knew as soon as I saw it from our balcony that I was going to love this place and I did.

Once we left the ship we entered a carpark which was just outside of the port. Here is where you will find every tourist seller there ever is. It’s a bit overwhelming at first as you get all of these people coming up to you trying to sell you tours etc…I recommend unless you have booked a tour with the ship taking it as it comes. 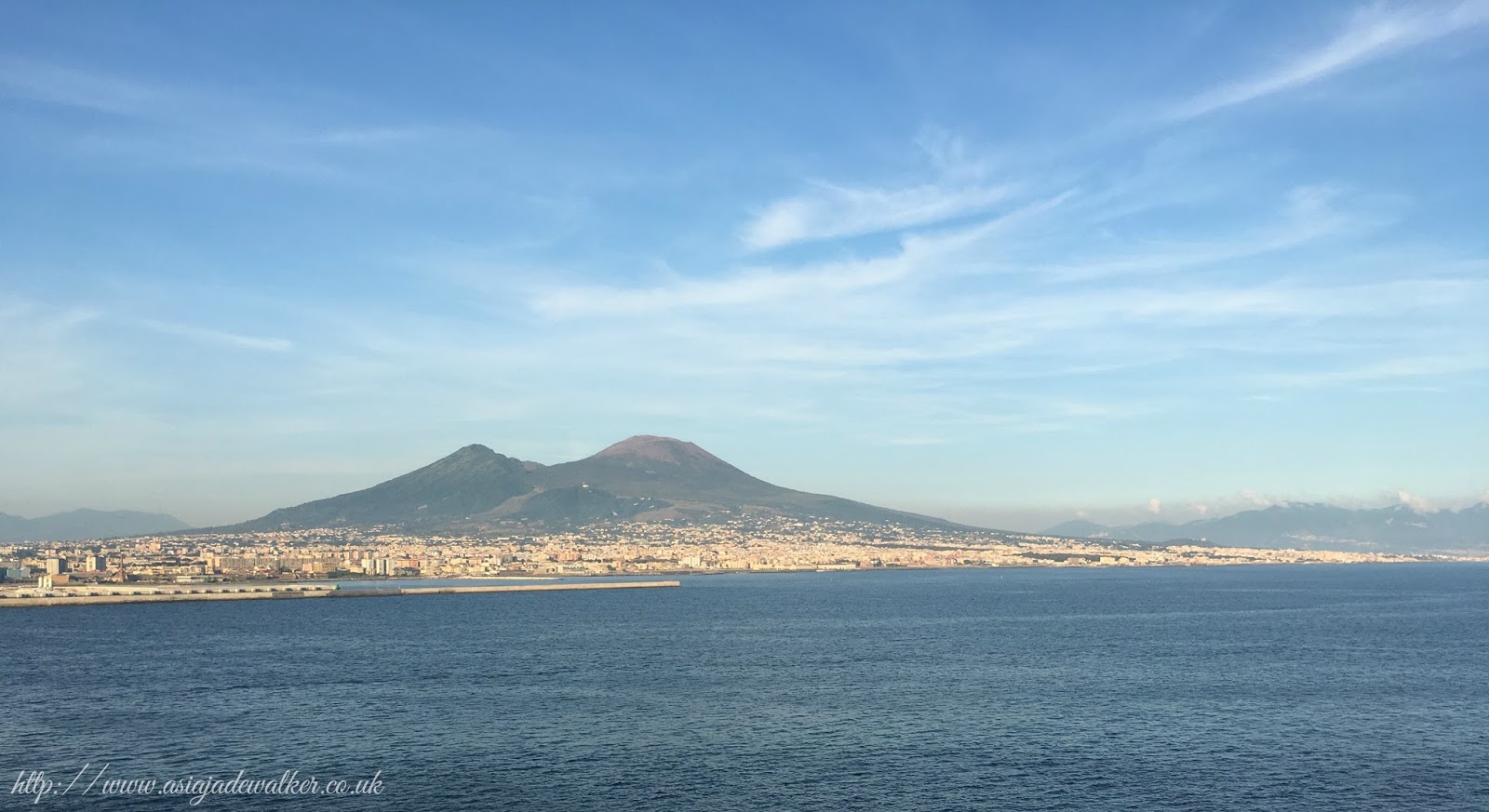 We decided to look around first before deciding which tour we were going to go on. There were many different options such as going in a taxi, taking a coach tour or the local bus. In the end we decided to hire a taxi driver for a few hours. He said he would drive us to Pompeii, around naples & back to the ship.

Our tour was 4 hours long and it was €50 each. I must add that tickets for Pompeii was not included in the €50 I think they were like €10. Just be careful with the prices as you are a tourist and they can easily rip you off. We found that if we stuck with the same person and bargained with them in the end we got a good deal. This is up to you as we bargained with the taxi driver as originally it was €79 per person.

As we were on a budget this was the best decision for us. Just to give you a bit of comparison our tour was 4 hours long it included an hour at the Pompeii ruins, a tour of Naples, a stop off for lunch and being dropped back off at the port as well as all of the traveling in between. It was €50 each excluding the Pompeii tickets so it came to €150 for the three of us.

The ships excursion on the other hand was about £150 on average per person for a 3 hour minimum tour around Naples & Pompeii. We were not prepared to pay this as my nan is 82 and having the flexibility to come back to the ship when we wanted to was better for us instead of being out for six hours minimum. 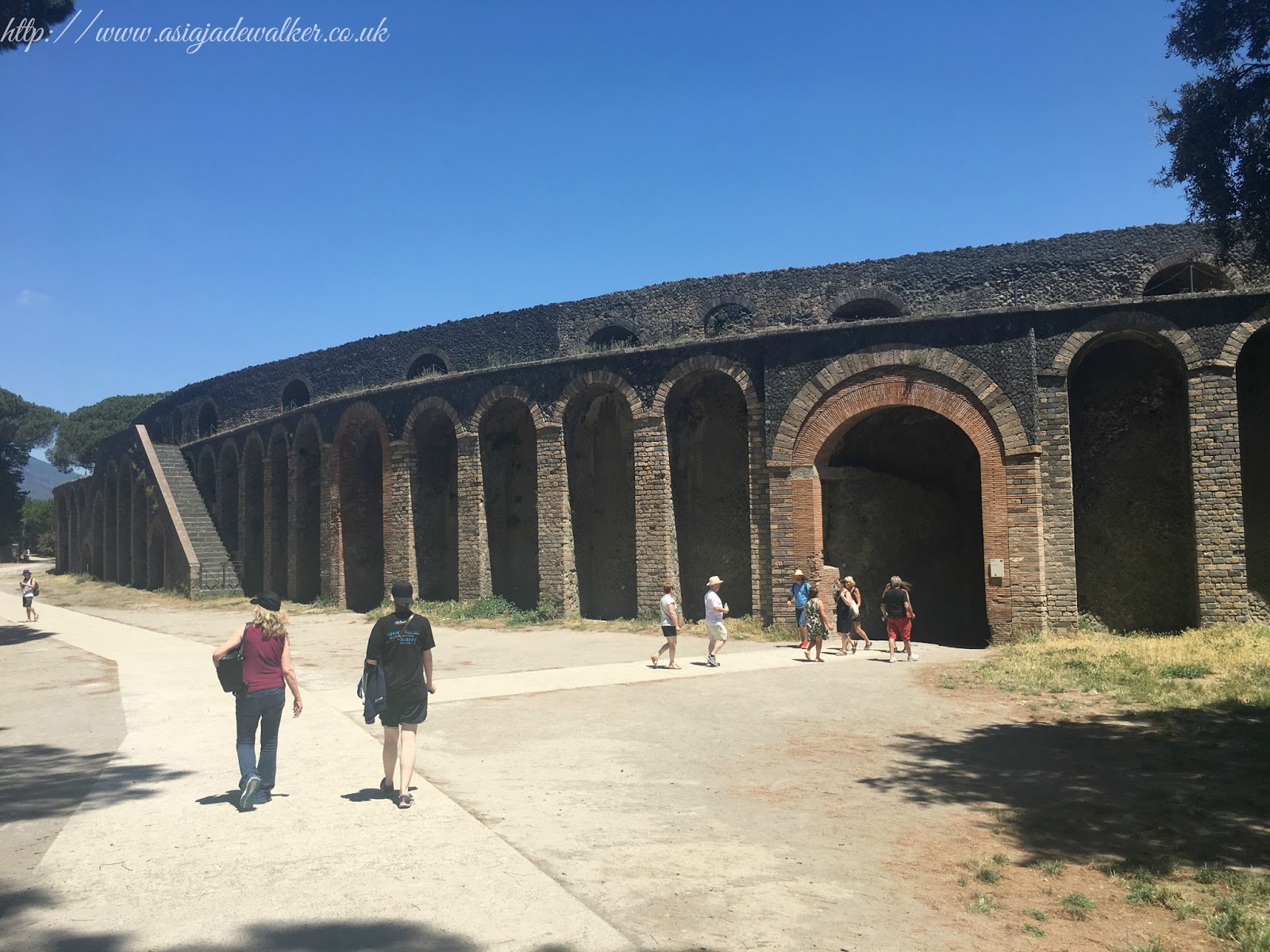 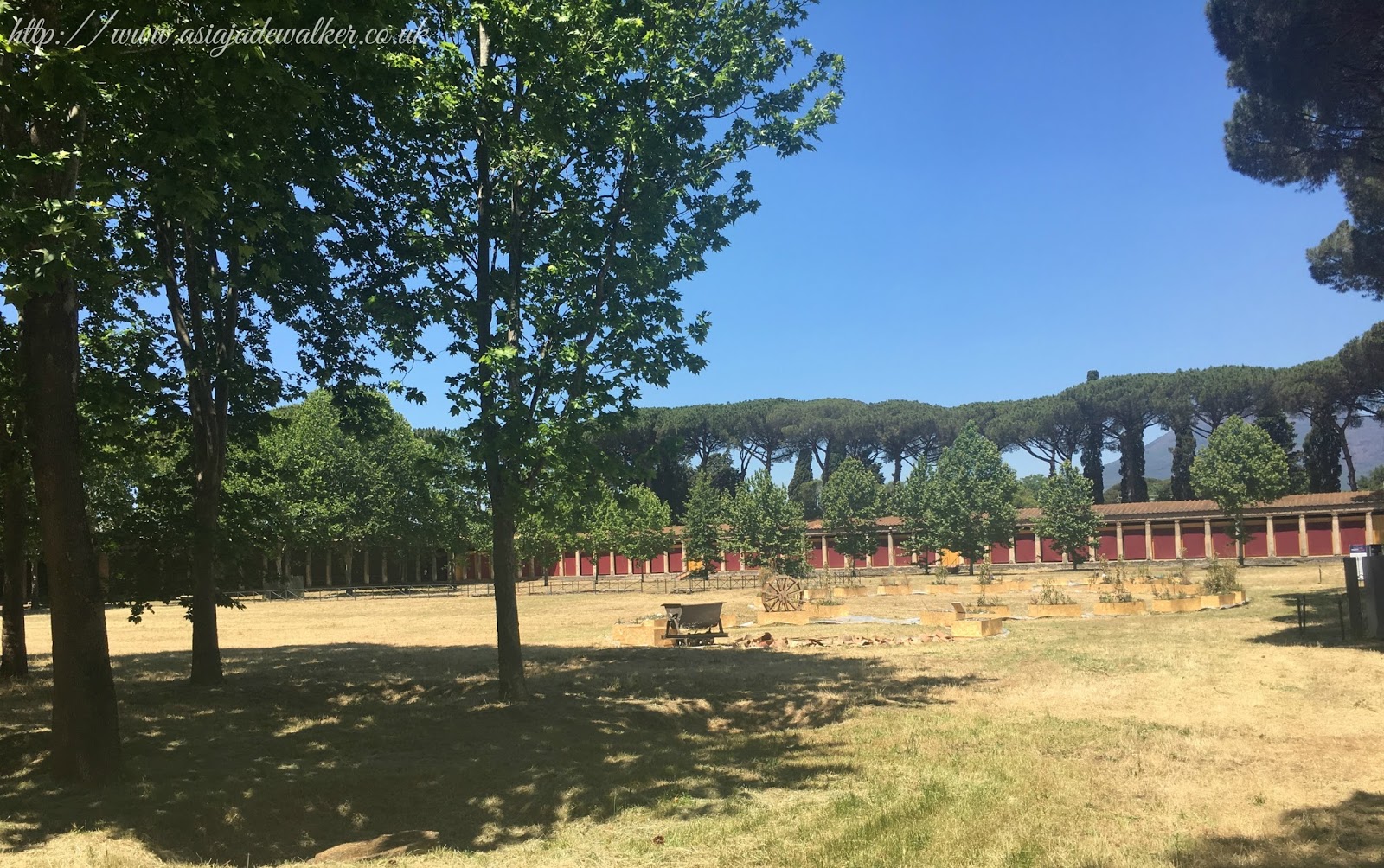 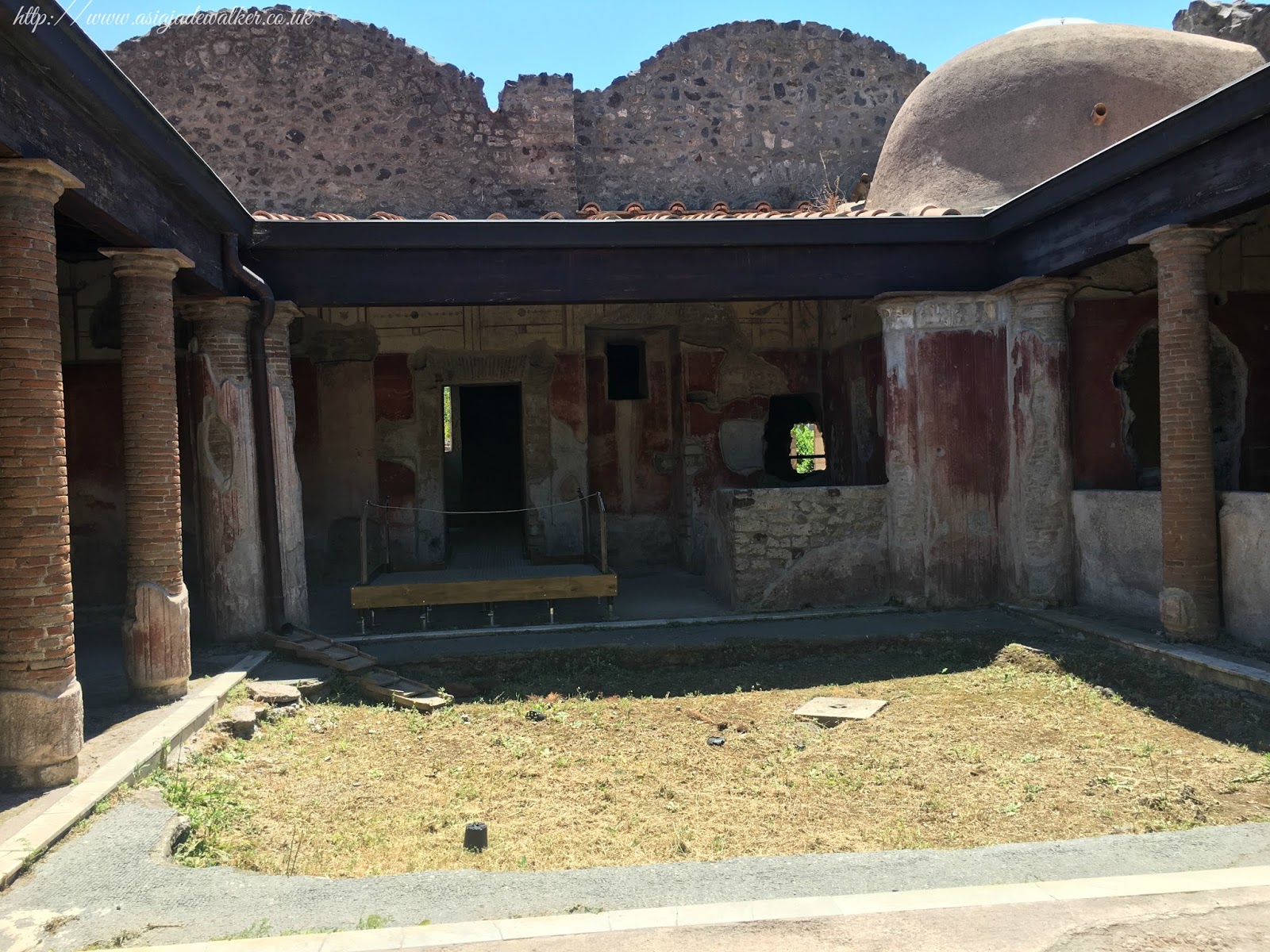 The first stop on our taxi tour was Pompeii which I have never really read about. The only knowledge that I had of it before was from the Doctor Who episode “The Fires of Pompeii” from 2008. It was about a 20 minute drive from Naples. When we arrived our taxi driver dropped us off at the exit that was least crowded.

We waited about half an hour to get tickets to go inside as it was quite busy on the day that we went. As we only had an hour to spend there we didn’t have much time when we finally got our tickets. We decided to plan a route that we could take which would eventually lead us back to where we started.

It still gave us an incredible gimpse into the archaeological site which was just so amazing to see. You just can’t imagine how the people felt when they saw the volcano erupt and all of the ash coming towards them it must have been terrifying.

I did learn that the volcano which is called Mount Vesuvius is still active although it hasn’t erupted for many years and always gives warning before it does. We all really enjoyed visiting Pompeii and I would like to go back one day and be able to walk around the whole thing as I feel like we only scratched the surface this time. 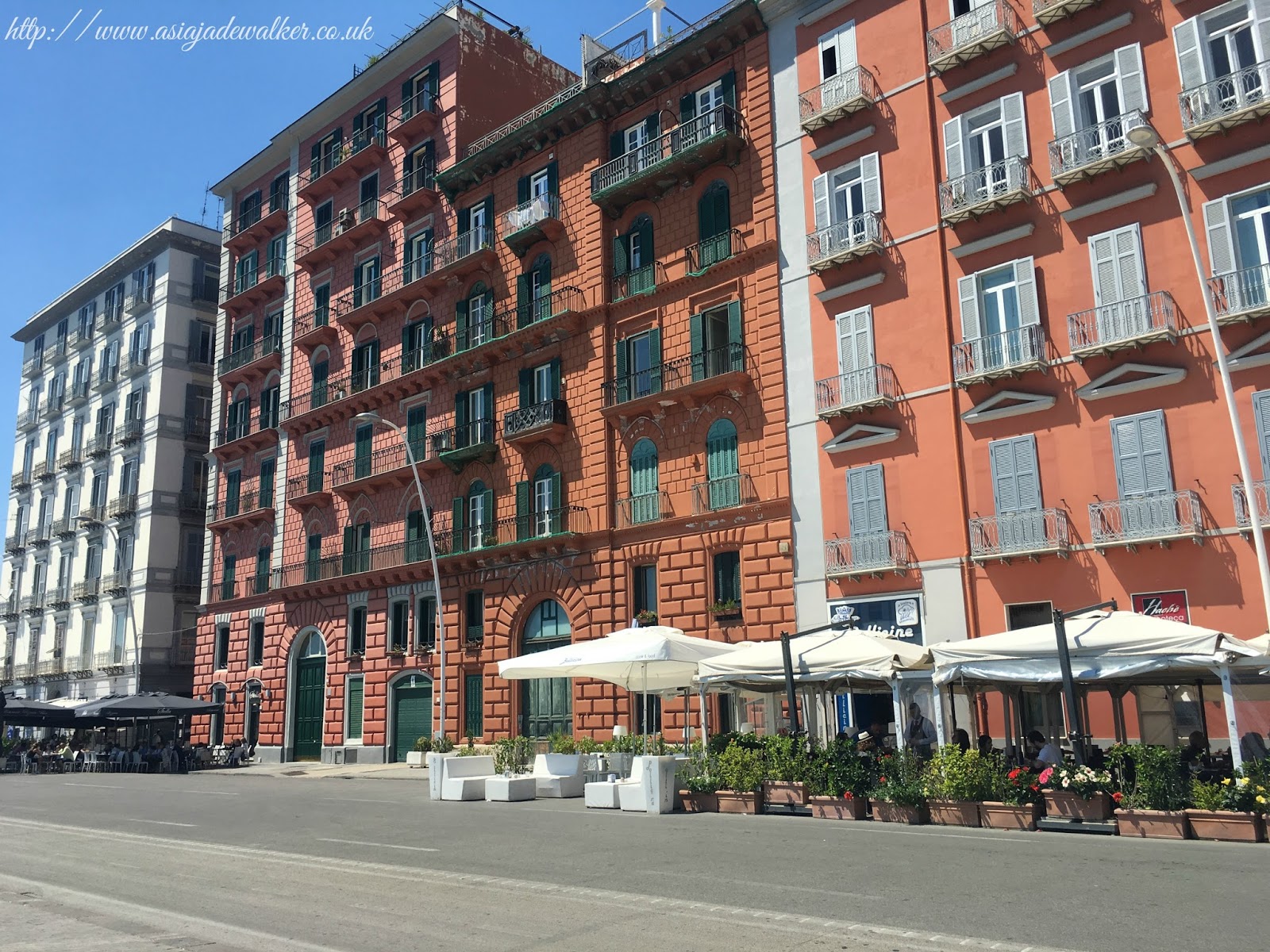 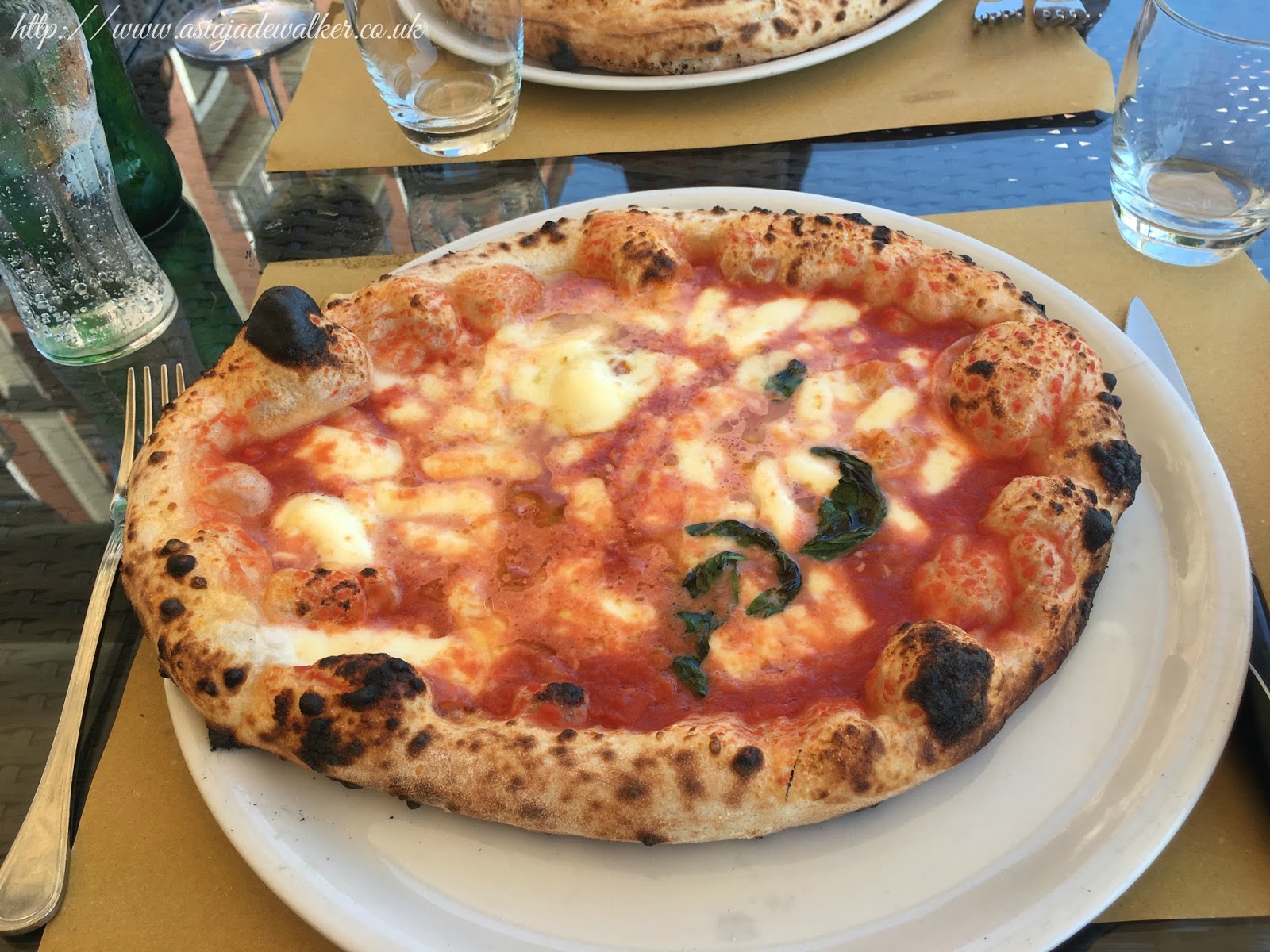 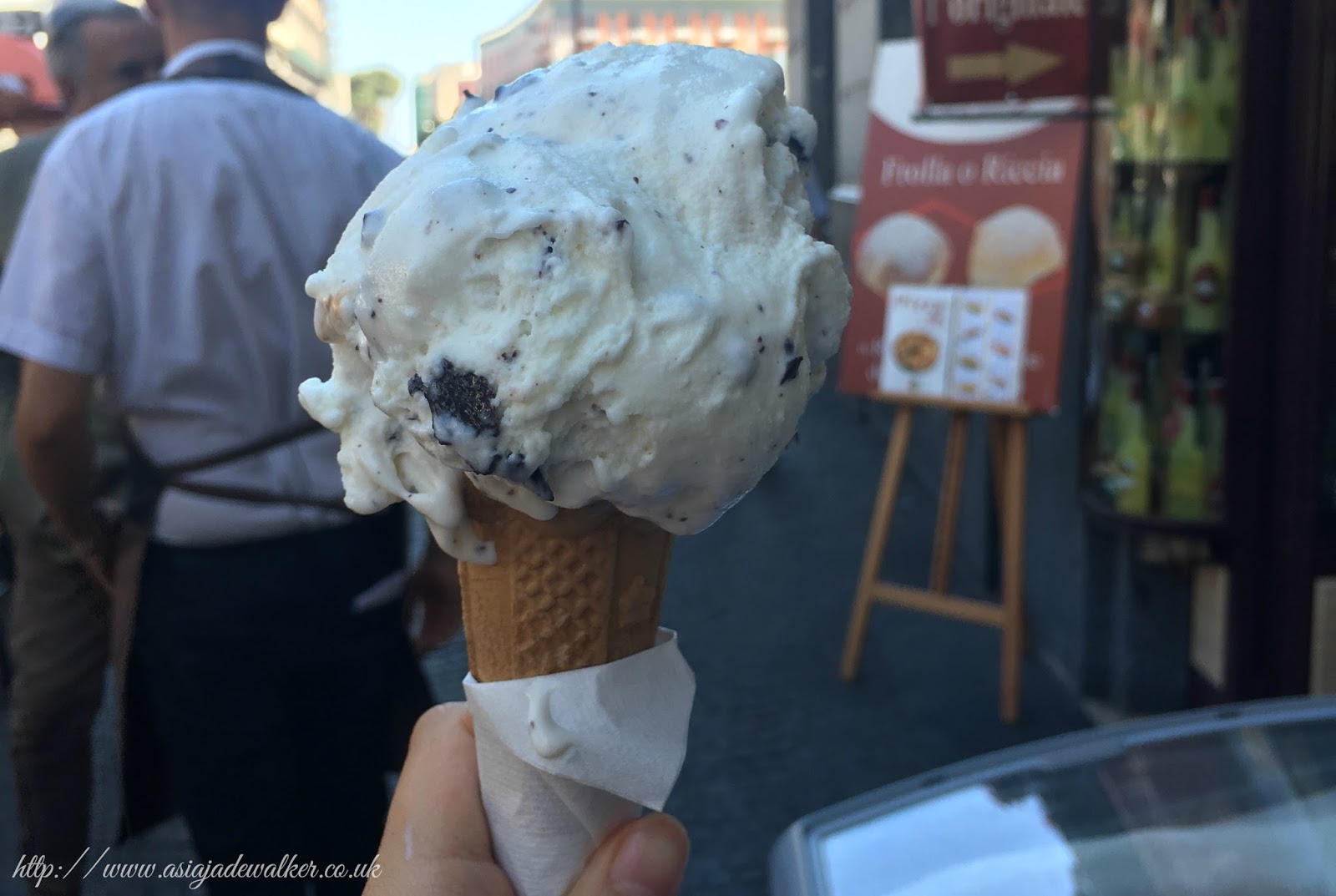 Our next stop was lunch in Naples, of course, we had to have pizza because we were in Italy duh! The pizza was amazing and it definitely lived up to my expectations. We were taken to a lovely restaurant that overlooked the sea and it was actually the sister of our taxi driver who owned it. He said that he would take us to the best pizza place in town which I think he did because we all ate it all.

We then went on a tour of Naples from the comfort of the taxi. I learnt so many things about the city and all the battles that they have faced over the years. It is really a lovely place and I would go back to Italy just to visit it. It was particularly hot on that day which was nice as it was hotter than Barcelona.

On our way back to the ship we had to stop off for some gelato before we got back to the port. All three of us were dying to try the Italian ice cream. Because it was so hot it melted so quickly luckily the taxi driver had tissues to give us as it got rather messy.

We then headed back to the port where we said goodbye to our Italian taxi driver Oscar who turned out to be great fun. The €50 that we paid was well worth it as we got a real insight to Naples & Pompeii not to mention a free history lesson as well! 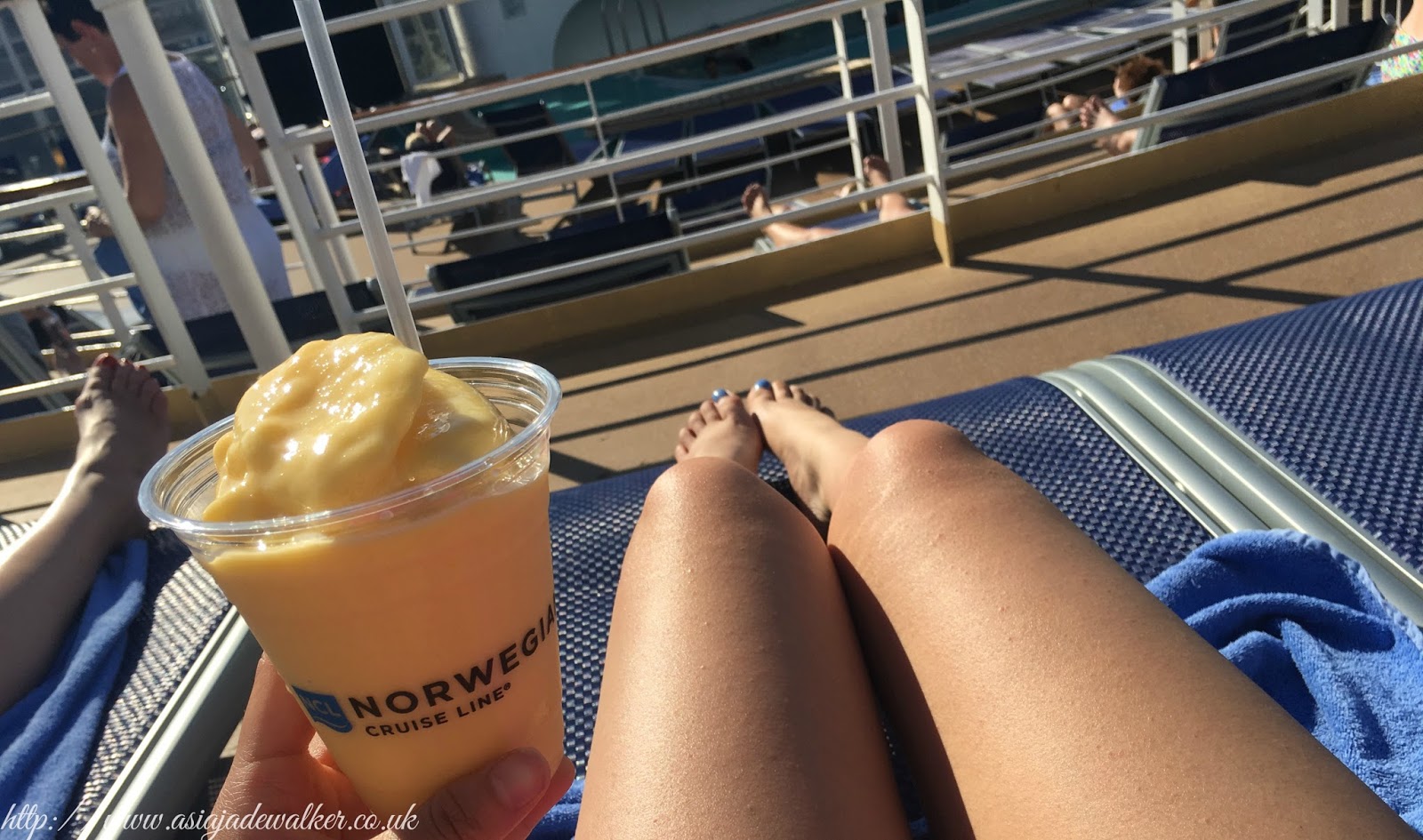 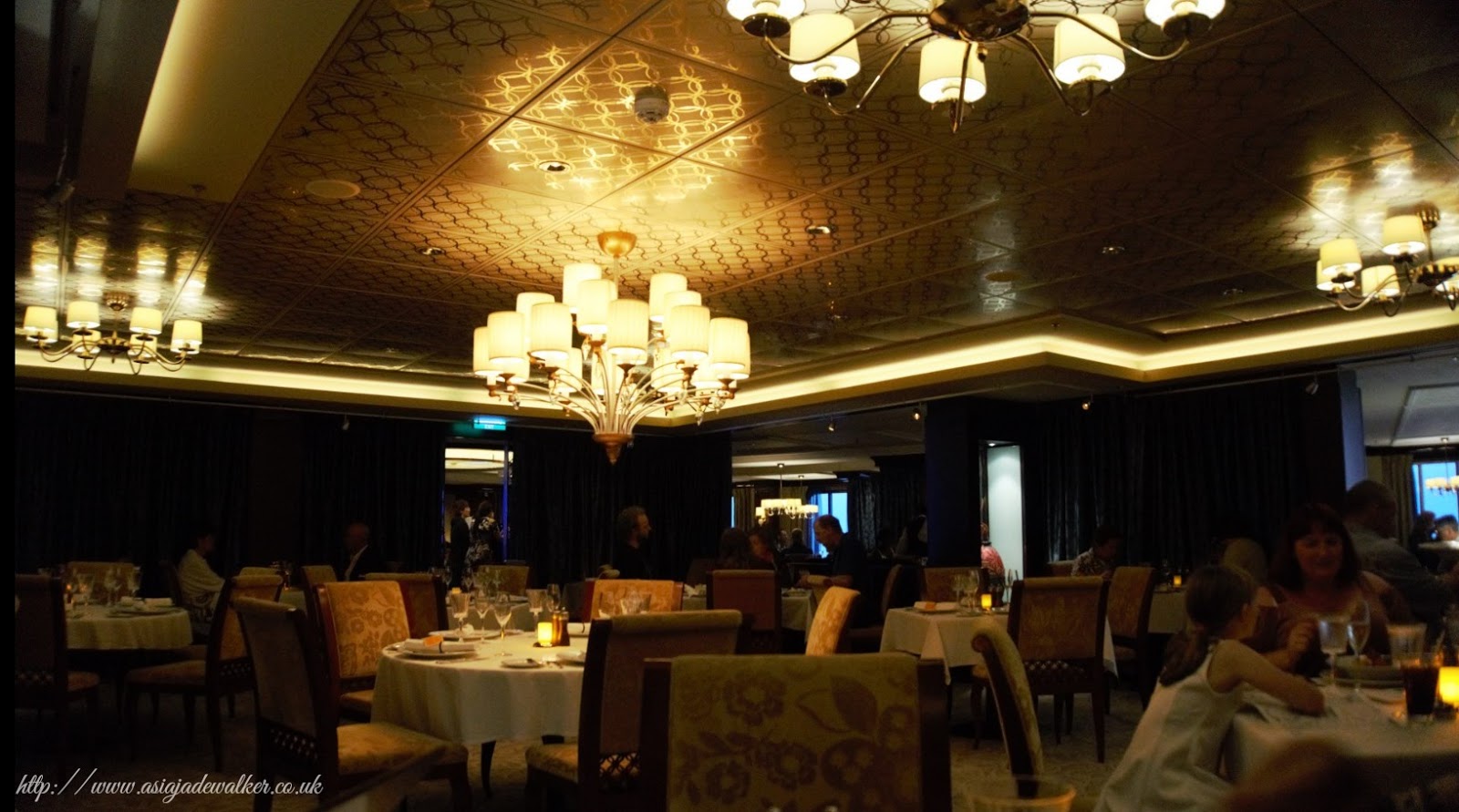 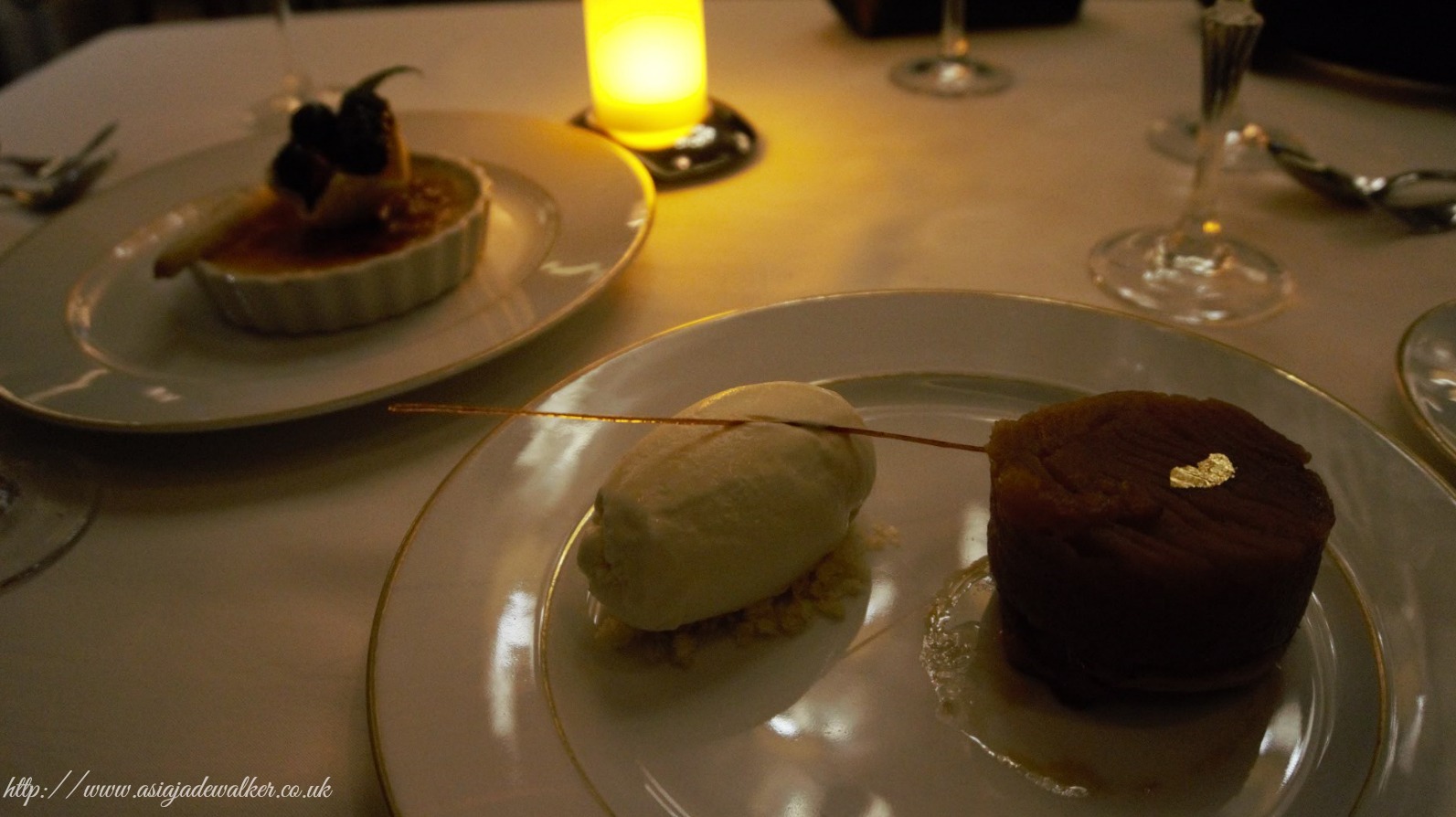 Once we had got back on the ship Mum & I headed up to the top deck to get a bit of tanning in before dinner. Nanny went back to the cabin to relax out of the sun as we had been in it for most of the day. It was so nice to sunbathe and look out onto Naples as we went to the adult section again at the back of the ship.

Our dinner choice for the evening was Le Bistro which is a speciality restaurant meaning that you do have to pay extra for it. We actually got a complimentary voucher for it as I had mentioned before that our cabin had a flooding problem so they had to move us to another one. I have to say the crew on the Norwegian Epic were very accommodating and really apologised for the flooding as it wasn’t our fault.

Le Bistro was really nice but quite posh I struggled to find food that I liked the only dish that I really liked was the desserts as they were delicious. We then looked around the art gallary onboard as both my Nan & Mum love looking at artwork.

There were some amazing pieces especially the Disney ones I really wanted to get one but I bet they were super expensive as they were on auction so they had no price tag on. We then all headed back to the cabin for an earlyish night as we were worn out from our first full day.