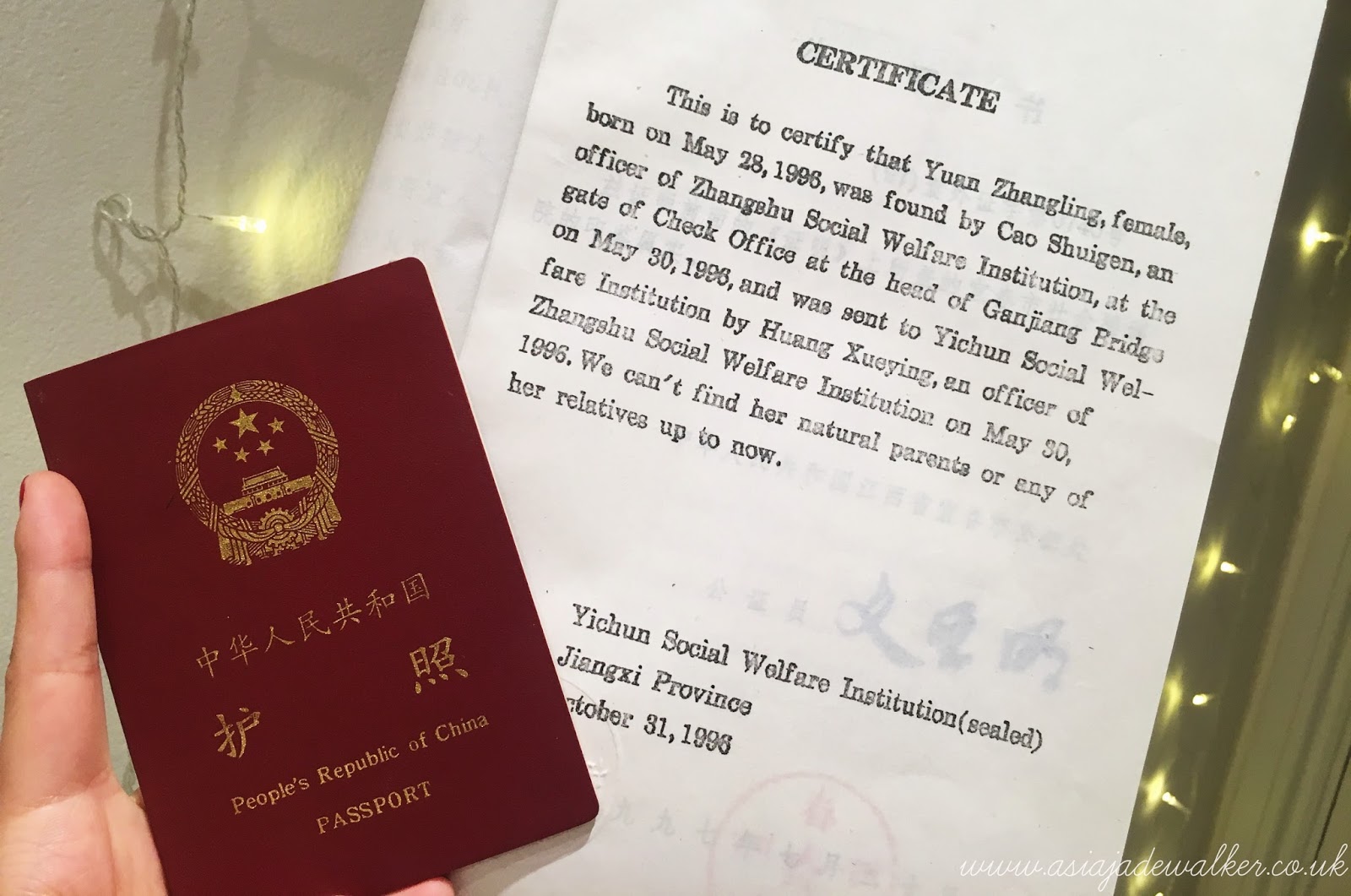 Today I watched a 3-minute video that has had me in deep thoughts ever since I watched it early this morning. It is about a family who travels to China to adopt a little boy. The video captures the day that they get to meet him and take him away to live with them. In an instant, their life has changed forever and so has the little boys. The video is by The Stauffer family and you can watch it here (have tissues as it’s extremely emotional).

I have never really known what the adoption process is like all I have known is what I have been told. So seeing this video made everything real because this is what my parents would have gone through when they adopted me back in 1996. It would have been different but similar at the same time.

If you have followed me for a while then you will know that I was adopted when I was 10 months old from China myself. I was adopted from a place called Nanchang which is in the province of Jiangxi which is South of Bejing. I’ve always known that I was adopted because my parents have always been open about it. On the other hand, all my family are English so I would have definitely worked it out otherwise.

Last November I opened my adoption papers on camera which included various papers such as my Chinese passport, adoption papers and medical papers. It also included this one document which explained how I became an orphan in the first place. It’s the document shown above which says that I was found “at the gate of Check Office at the head of Ganjiang Bridge on May 30th, 1996”. I was two days old as my birthday is May 28th 1996.  The last bit says “We can’t find her natural parents or any of her relatives up to now”.

I was born in 1996 which is during China’s one-child policy. If you aren’t sure what this is then I’ll give you a quick explanation. China’s population was getting too big which is why they introduced this policy. Couples were only allowed to have one child and had to apply if they wanted another one before even trying for one. During that time China valued boys because they could become strong and could go out and work to earn money.

If a couple had a girl then the chances are that they would either homeless, in an orphanage or even killed in some circumstances. A number of orphanages were full of girls. This left China with an unbalanced population which has carried on today as it’s thought that the number of men that outweigh women is around 60 billion.

I have no idea why I became an orphan but I am certain it has something to do with the one-child policy. However, my family could have been really poor, ill or just couldn’t look after me for other reasons. For that reason, I am 100% sure that I will never be able to meet my biological family. I guess it does hurt because I will always be missing something that some people take for granted.

I know that nowadays there are so many ways to find your family and I’ve seen it done many times as I’m a big fan of Long Lost Family. However, I was adopted from China where there are now over 1.379 billion people. Not to mention I was adopted from a poor area that was mainly industrial at the time. I’m 22 now and I am old enough to realise that the chances of ever finding my parents are very slim for these reasons.

In all honesty it sucks because I would love to know my real family and to have that bond with them that everyone else has with their parents. The bond I have with my adoptive parents is just like any other but there will always be that something missing and we all know that. I would love to know who I look like more whether I have my dads eyes or my mum’s smile. Unfortunately, I will never know this unless something like a miracle happens.

I have considered doing a DNA test but I have my doubts as to how much it will give me in terms of information. Considering they did everything by paperback then I’m certain that they wouldn’t have my parents DNA stored. Maybe in a Chinese database but how long would that take and how much would it cost. I’ve also realised that if I really wanted to know more then it would cost a lot as I’d probably have to do a lot of my research back where it all began in Nanchang.

Although I’m always open to talking about my adoption because it’s so important for me to do mentally as it helps me and I know it helps others as well. I’m not ready to begin my journey to find my parents. I probably won’t ever be as it could bring a lot of pain which makes me think is it worth it? Would it be worth it to go through an incredibly emotional journey to find out what I already presume?

It’s hard not to think about something like this all the time. It’s always on my mind and I’m constantly thinking about scenarios where I may meet my real family but I always know that the possibilities of that happening are pretty much non-existent.  However, I know I am a strong person because although this topic makes me sad it makes me extremely proud because I have a story to tell in the hope that it helps those who aren’t strong enough to talk about it.

For now, I just want to build my life here in London. I want to focus on my career, moving out and possibly getting married and having kids in the future. I know that I want to adopt as I have always felt that way ever since I was little. I think it’s something you feel when you are adopted.

Maybe in the future when I have my own kids I may want to start this journey and I hope to bring you along too as I know I would want to document it all the good and the bad. Until then I just want to say thank you to everyone who has supported me because at times it is hard even though I may seem happy on the outside it’s hard mentally sometimes but having you all there helps a lot.

Check out my other adoption blog posts & videos:

4. Negative Aspects About Being Adopted