Hey everyone, first of all, I just want to say a big thank you for sticking by me these past few weeks when I haven’t been very active on my blog or channel. I have just been super busy with life in general and haven’t had a chance to sit down and focus on my blog or channel. I was also out of the country for 2 weeks which meant that I didn’t have time to write anything up as I was away for work.

I’m sure that most of you already know that I recently visited New Zealand. I was given this once in a lifetime opportunity to attend a global marketing meeting as part of the UK marketing team. The company I work for is a New Zealand company which is why I went there as our head office is out there.

It was all a bit of a whirlwind as I was only told that I was going about a month before I actually flew out. As New Zealand is so far away I was out of the country for about 2 weeks including travel which took up a lot of time. I tried to document as much of it as I could but as it was a work trip I couldn’t document everything. 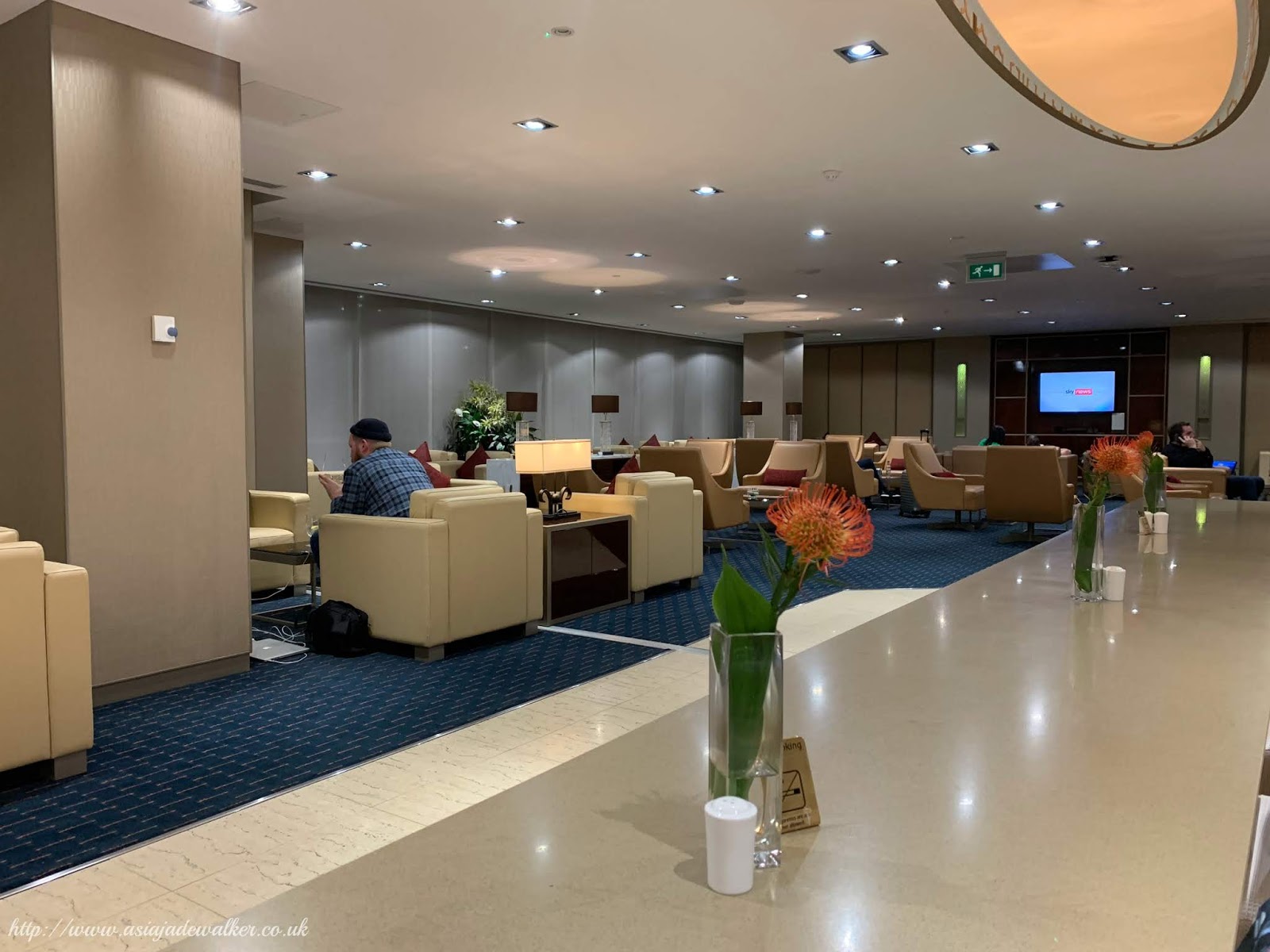 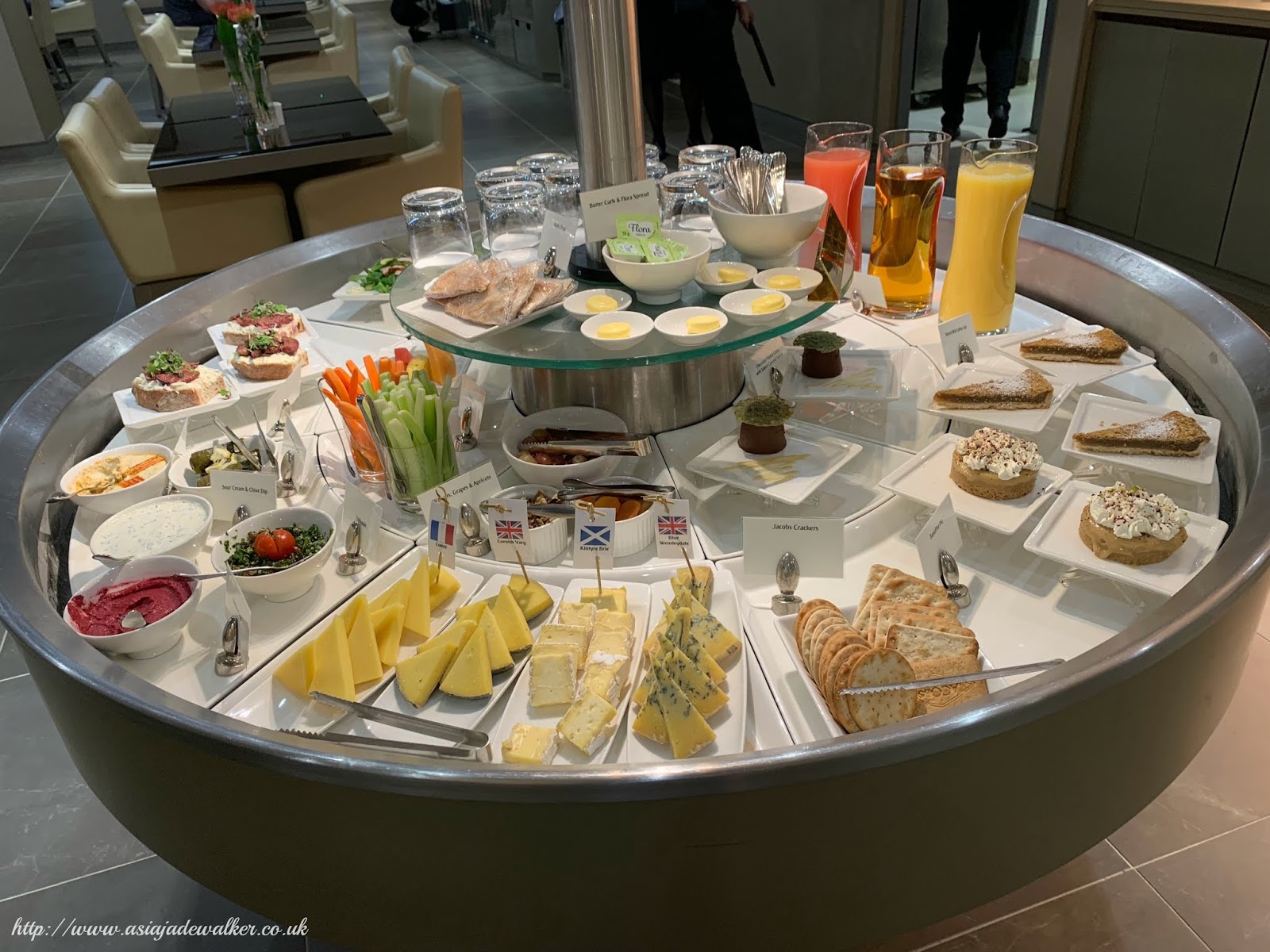 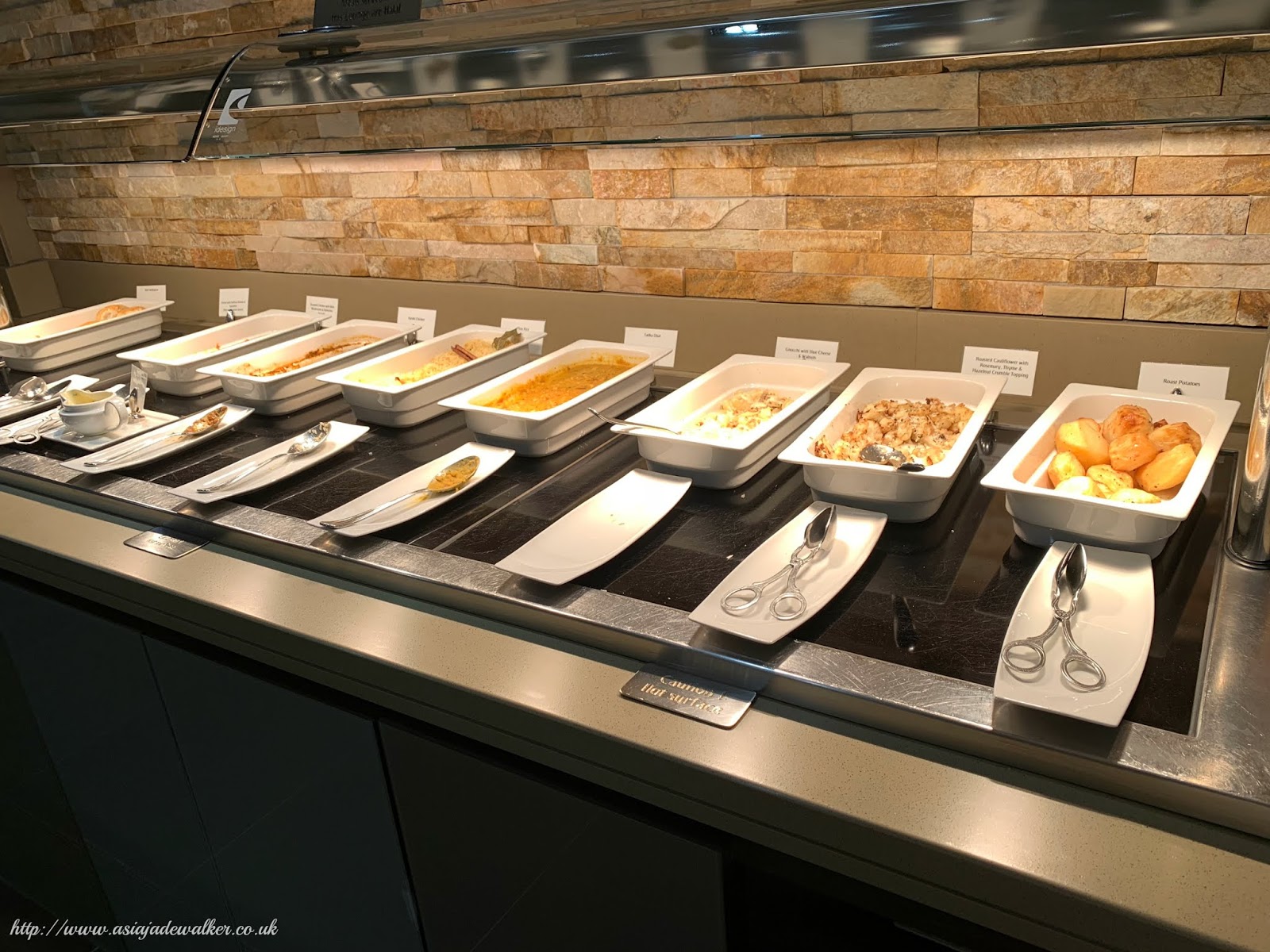 My adventure started on Monday 19th November which was the day that I was flying out of London. As my flight wasn’t until 8pm at night I went into the office until 2pm as I had things to finish off before I left. I got home about 3pm and finished off packing before being picked up by an Emirates chauffeur which is a free service that is available to any business or first class passengers.

As this trip was a business trip I was able to fly business class but also because I would be going on three flights in total which would come to a total of around 30 hours flying not including the time you have waiting around at airports for your next flight.

I managed to get myself all checked in on time and got through security by myself before I realised that I had left all of my chargers at home. This was my laptop charger, my phone charger and my work laptop charger. Before I had even left England I had to spend money on a new Apple charger which costs quite a lot. Luckily they had a Dixons in the airport which had all of the chargers that I needed.

I then headed to the Emirates lounge which was an area only for business or first class passengers. If you have never been to an airline lounge before then it’s a place where you can go and rest, charge up your phone, use free wifi, eat and drink in comfort before your flight. 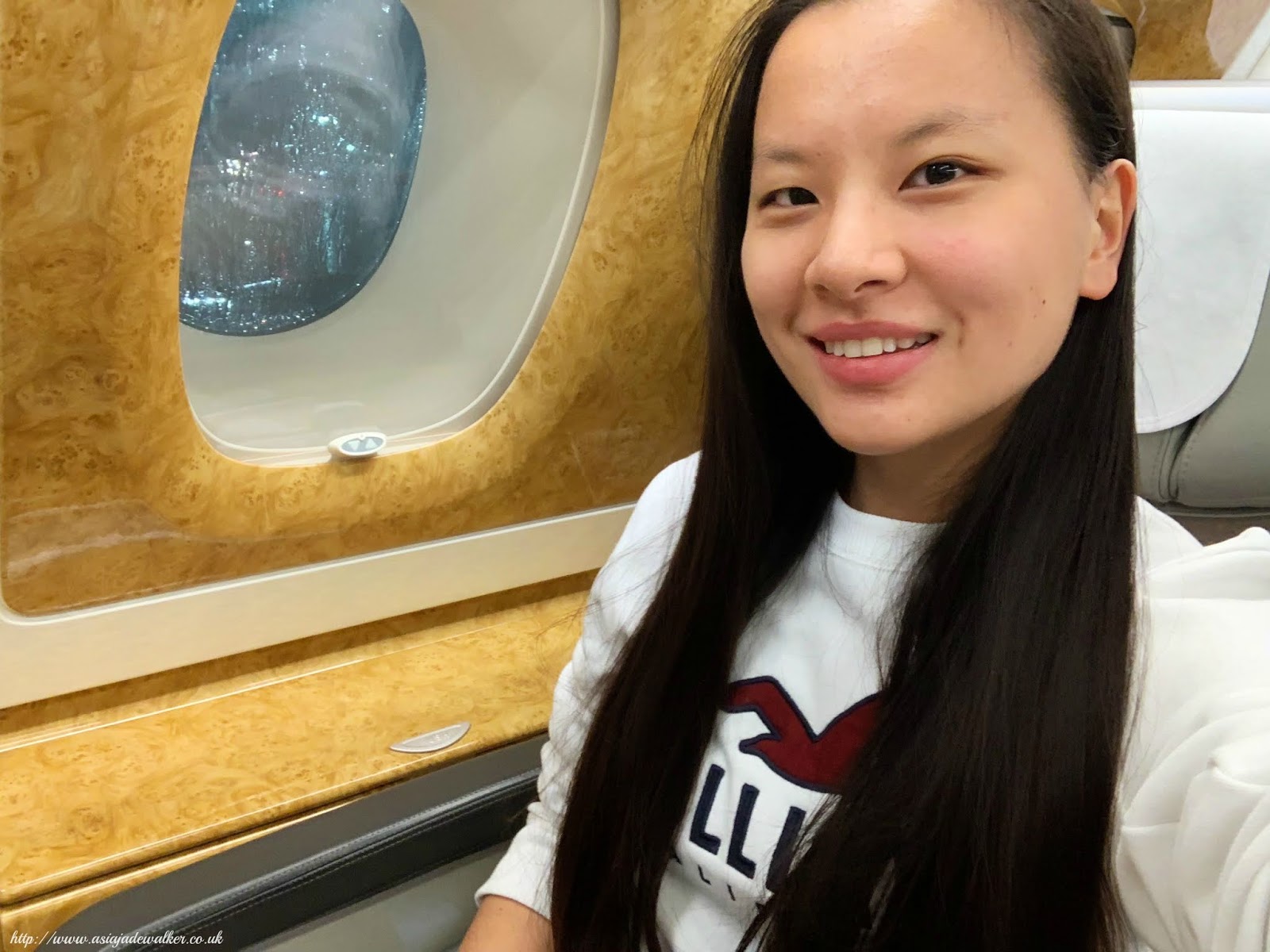 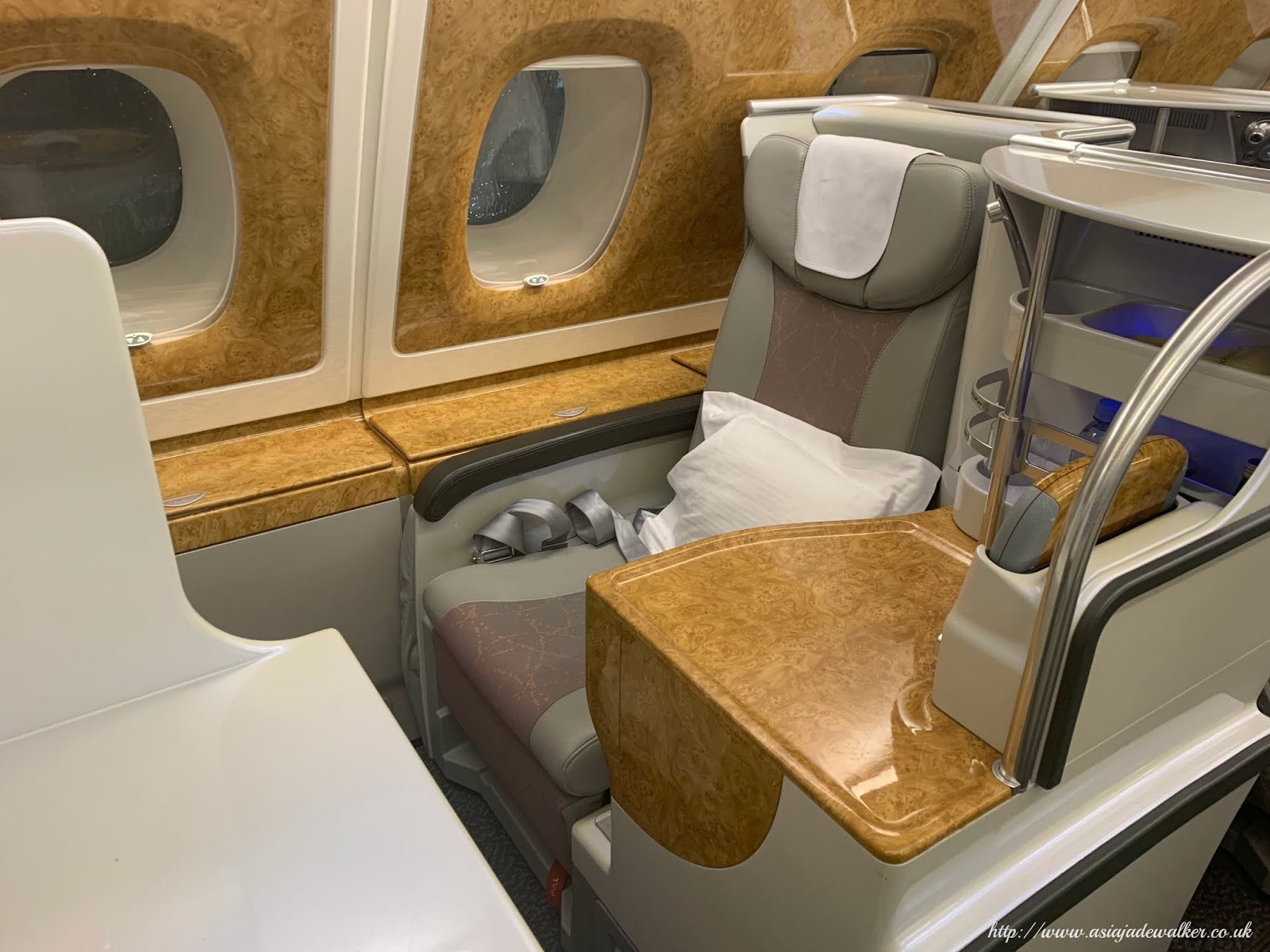 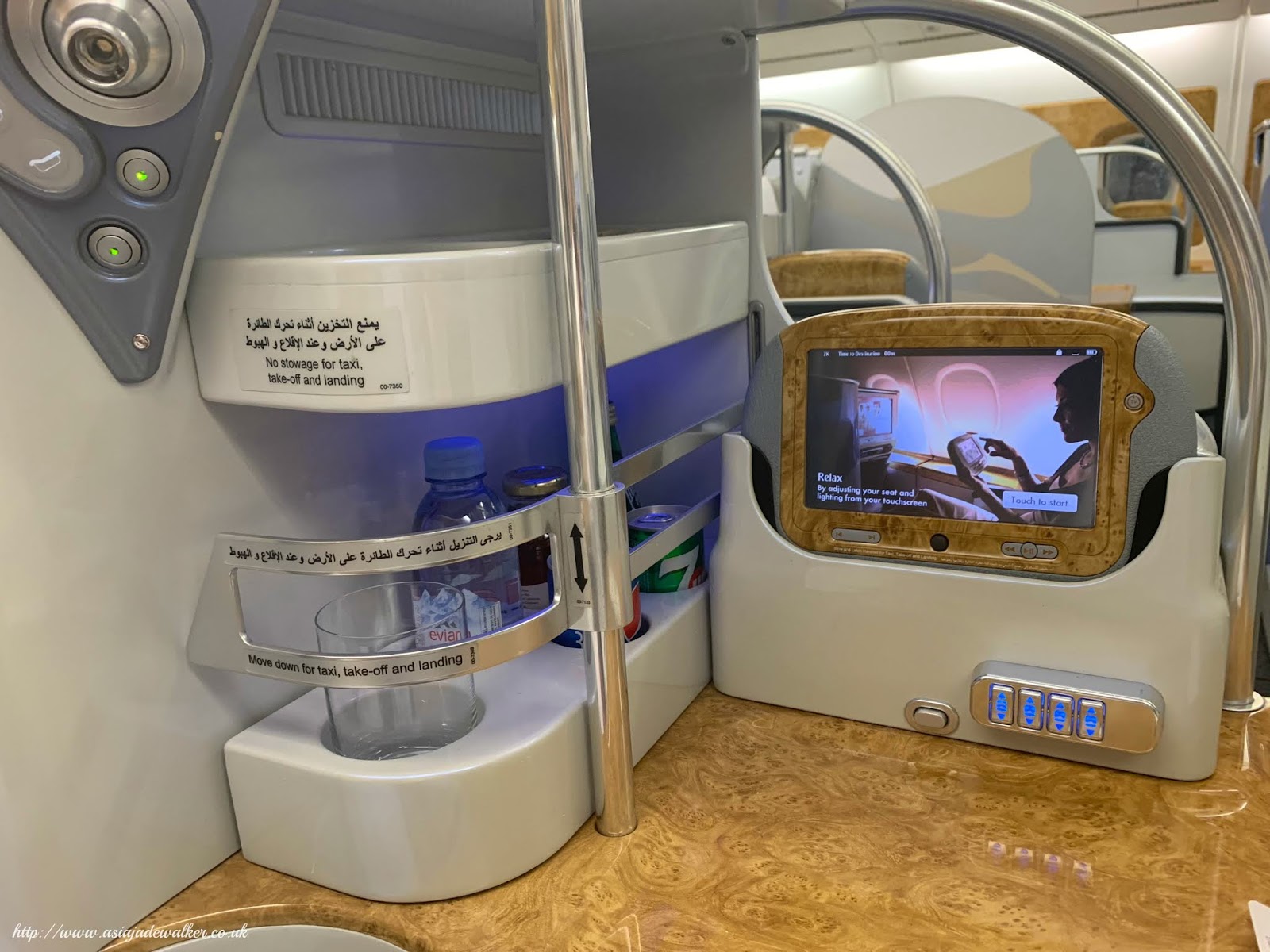 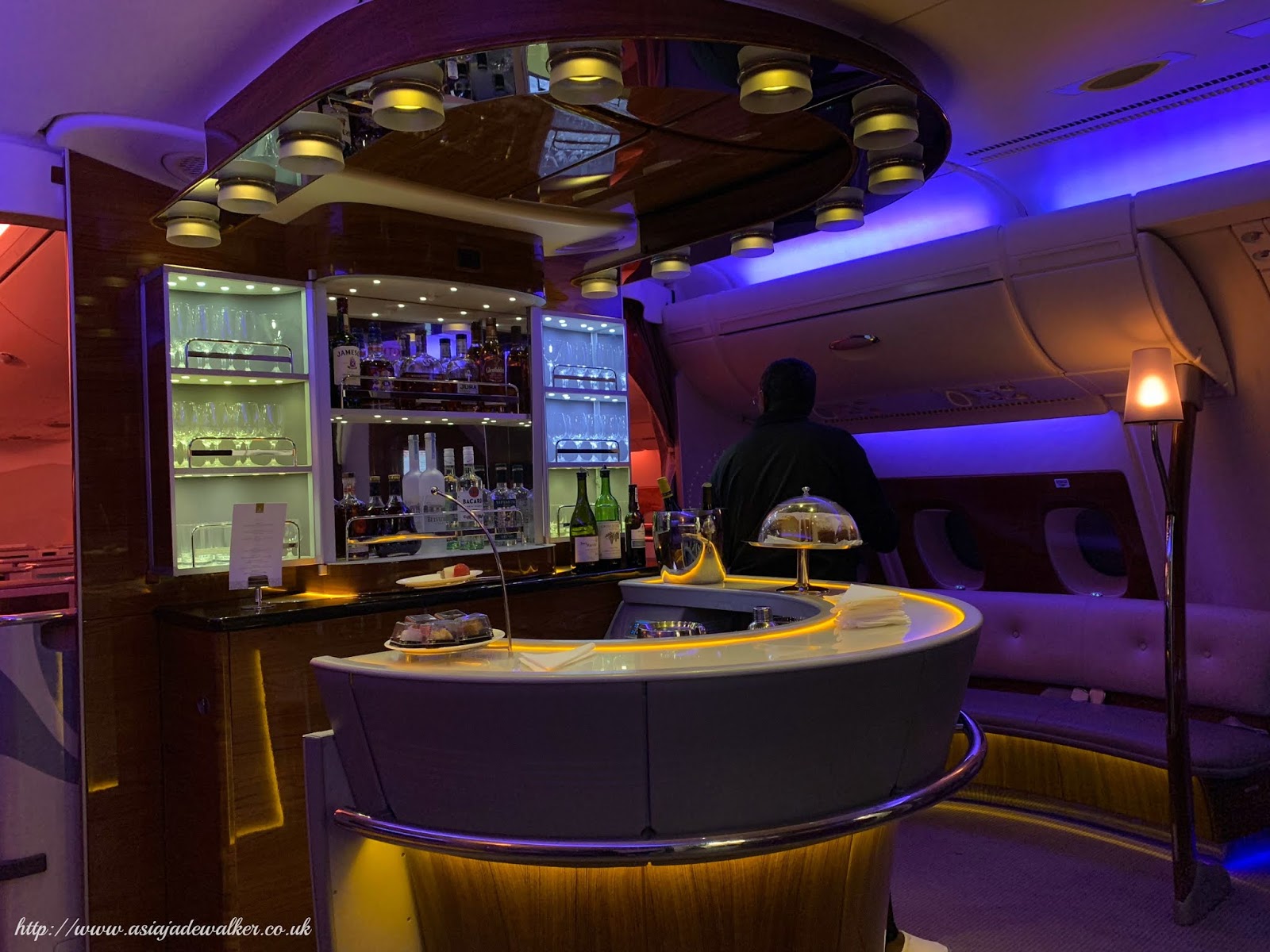 My first leg of the journey was from London Gatwick to Dubai which was due to be around 8 hours. The plane that I flew on was a double-decker plane which I had never been on before. As I was flying business this meant that I was on the top floor with the first class passengers.

I was amazed from the moment I stepped onto the plane as it was like entering a different world. In all my life I had never experienced anything business or first class so this was a real treat for me. The seats were amazing as you had so much room as well as a tv, bed & mini bar. You can see a full tour of my travel vlog which I uploaded onto my YouTube channel. One thing I really loved was the amount of storage that there was for all of your belongings.
The seat turned into a bed as it could fully lay down by using some buttons located near your mini bar. You also had a mini iPad type device that you could use to control your screen. There were hundreds of movies and TV shows to choose from which is always my favourite part of a long-haul flight.

The best part of the whole aircraft was the bar at the end of the plane which offered drinks for the whole length of the flight. You can also go to the bar if you are hungry as they serve snacks like noodles & salads as well as having smaller snacks such as M&M’s and sandwiches that you can take back to your seat. 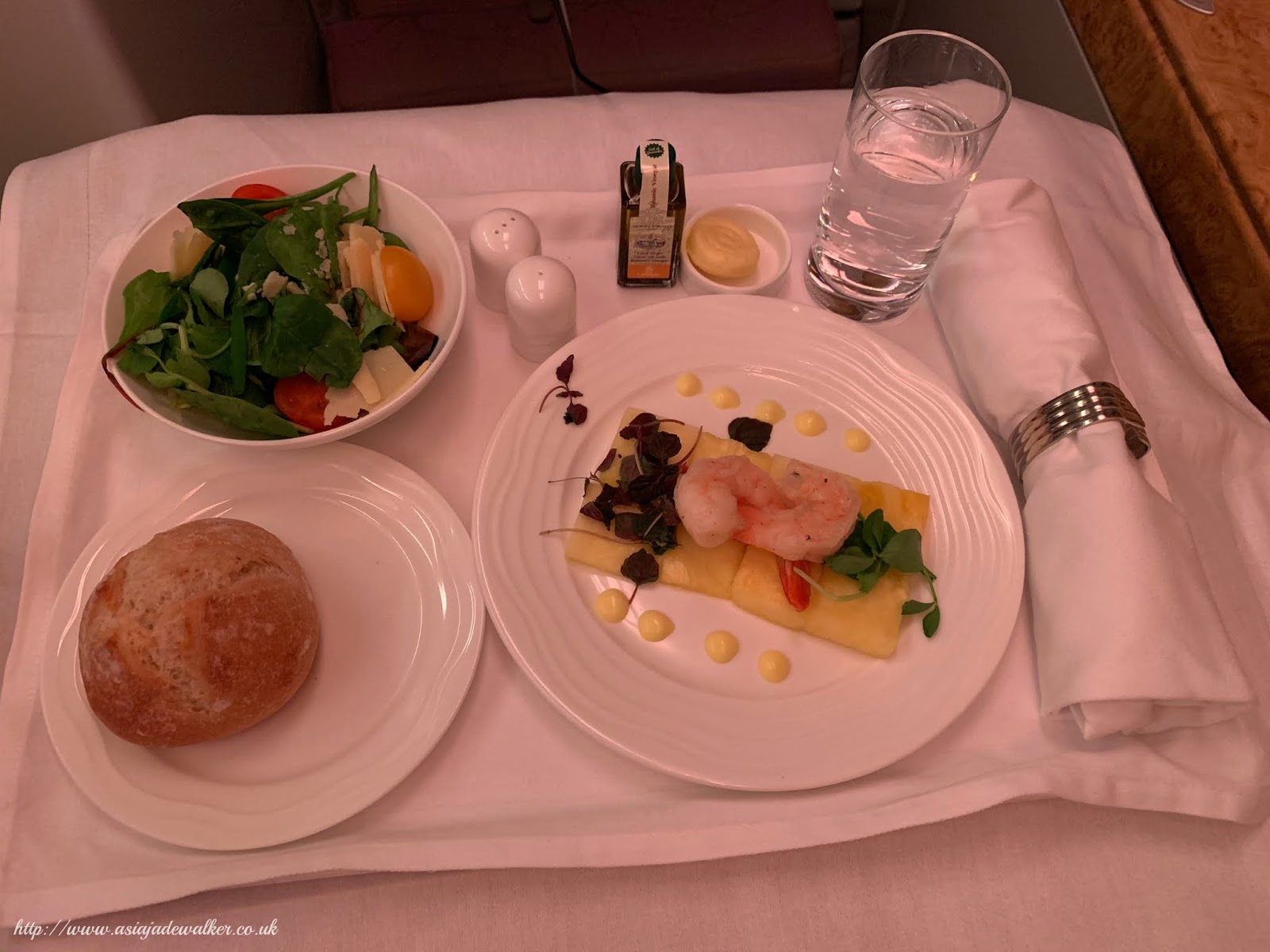 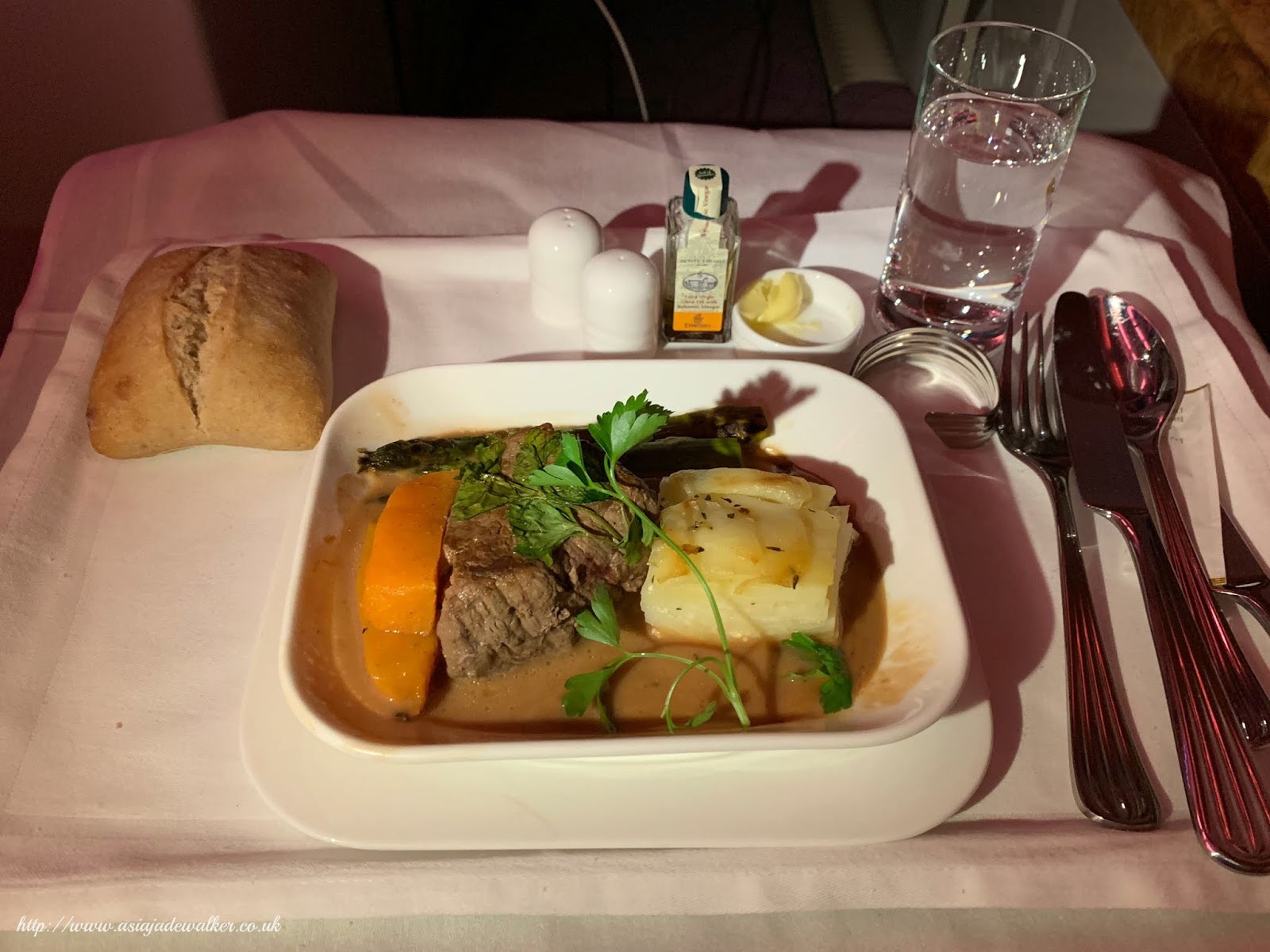 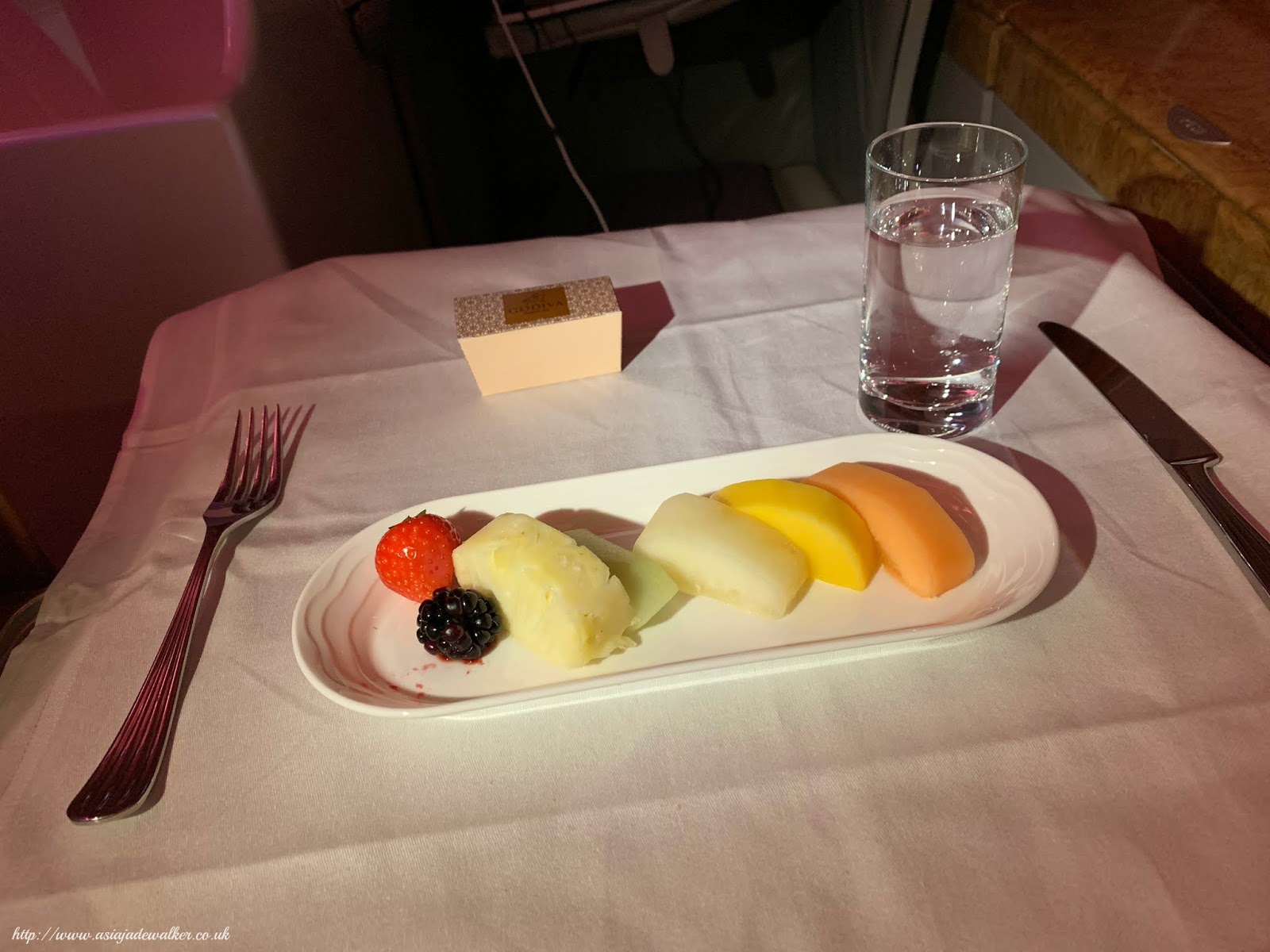 One of my colleagues Tomas actually went to New Zealand a week before me so he gave me the lowdown of what flying business class was like. The first thing Tomas said was that you will not need to eat anything as you will be constantly fed. Tomas was not wrong. As the flight from London to Dubai was 8 hours long this meant that a meal was included in the flight.

This part of the journey was a night flight so I had dinner which consisted of a starter, main and dessert! Each course was beautifully presented and it was like sitting in a fine dining restaurant. If you are an alcohol drinker then you won’t be disappointed as they are always bringing around alcoholic beverages as well as non-alcoholic drinks.

On this flight for my starter, I had shrimp and pineapple with a side salad and a warm bread roll. For my main, I had like a beef dinner with another warm bread roll. I was really full by then so for pudding I just had some fresh fruit which was delicious. They also give you a cute box of chocolates. 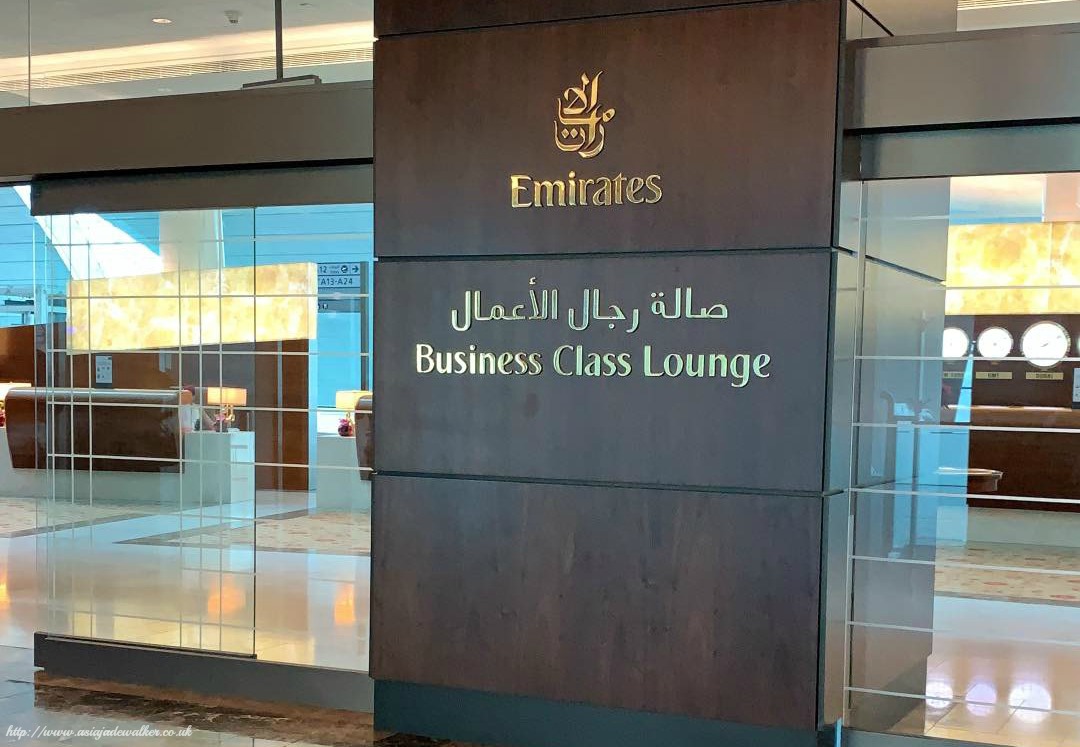 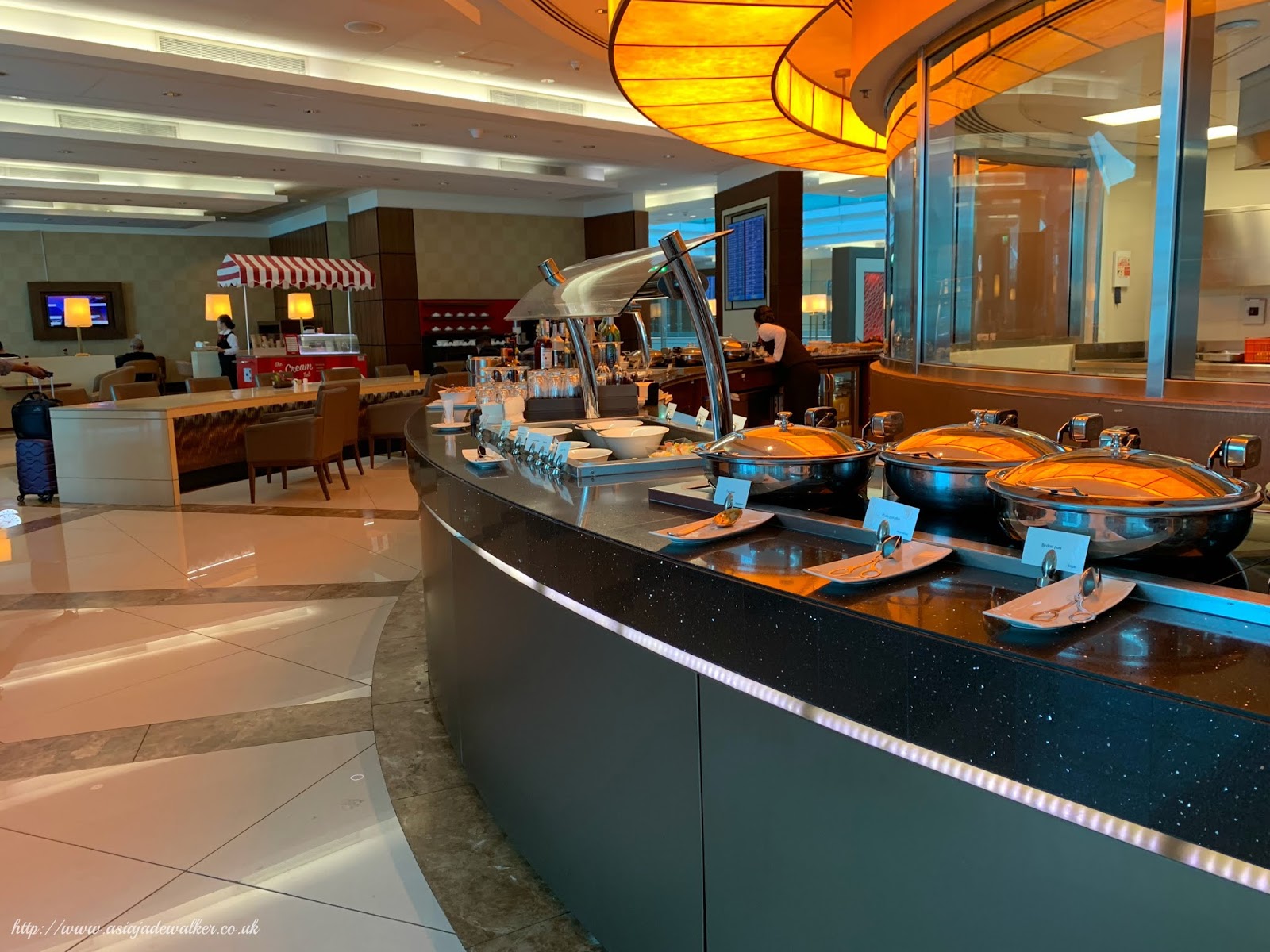 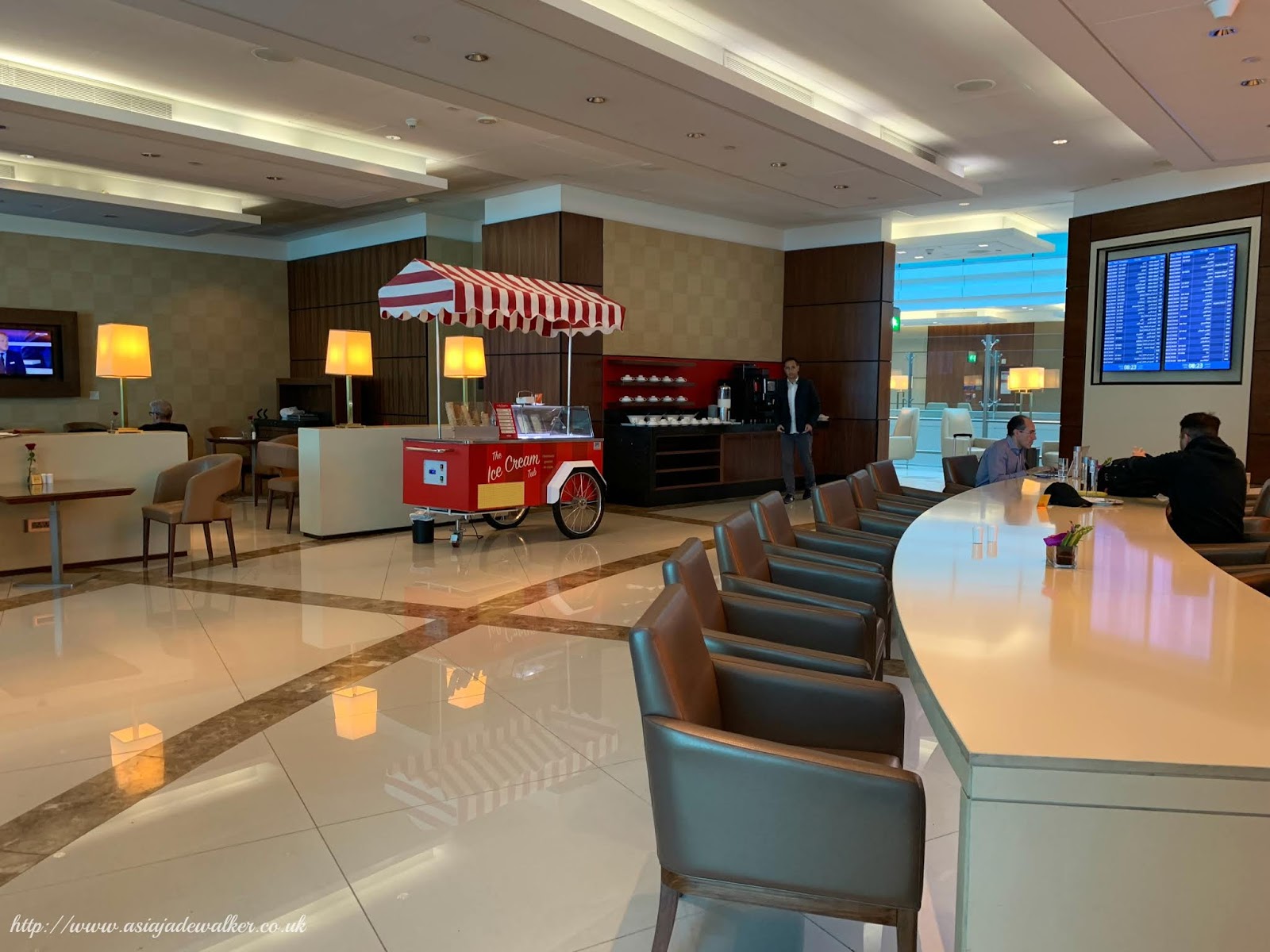 8 hours later I landed in Dubai which I have actually been to once before back in 2007 when it was less built up. Because I was changing flights I had to go through security again to get to the gates. However, this was really easy and not as stressful as I had anticipated it to be.

I think I slept about an hour on the flight which totally foiled my plan of trying to stay awake for the whole flight so that I could sleep on my second flight. As soon as I had passed through security I headed straight to the business lounge as in Dubai to access your gate if you are in business class or first class you have to go via the business lounge. This particular business lounge was huge as Emirates are an airline based in Dubai.

I was really impressed with the lounge as it wasn’t claustrophobic at all and there was plenty of space for everyone. There was a lot of food and drink on offer, however, I didn’t eat any of it as I knew I would be eating a lot on the next flight. 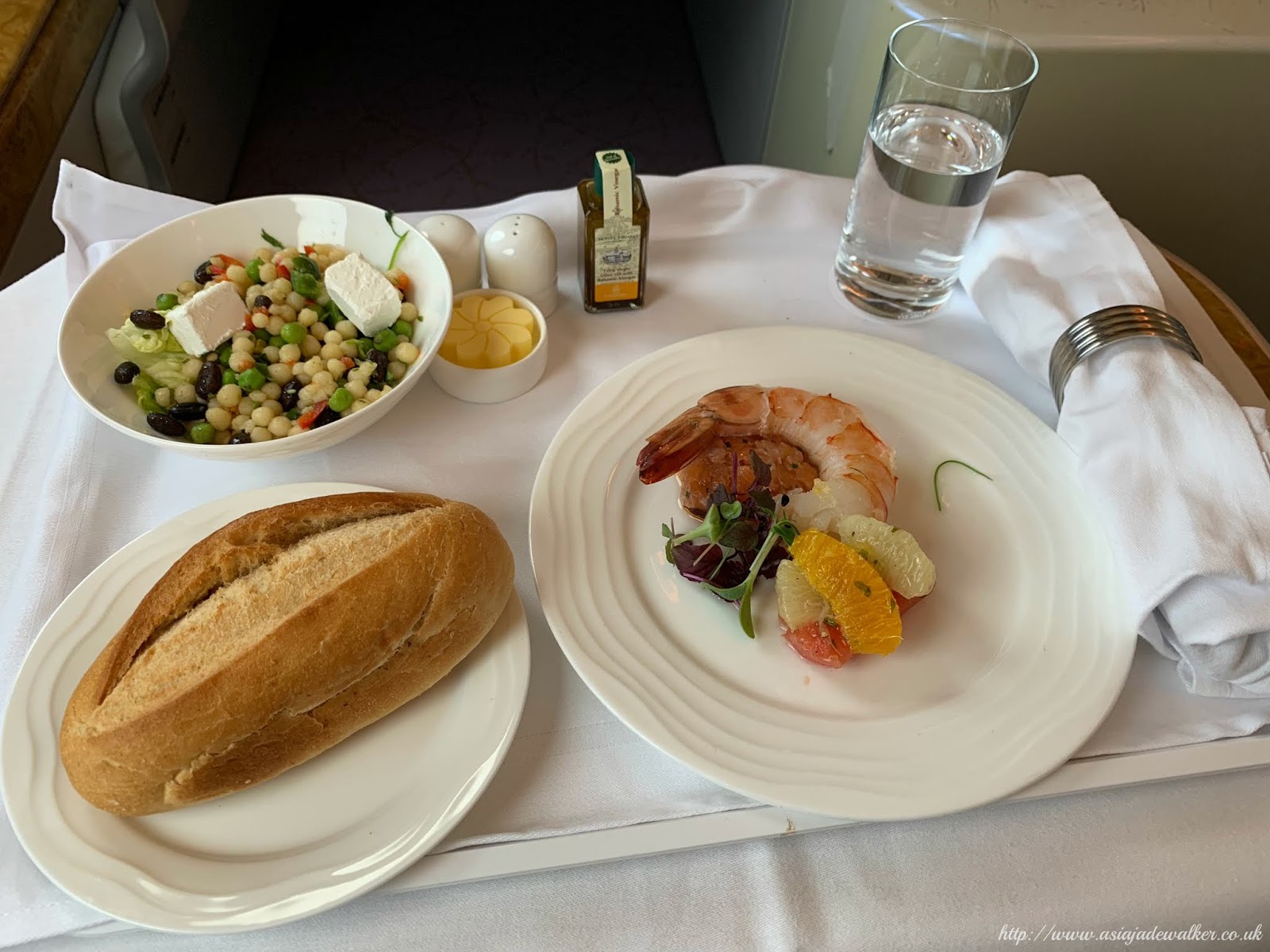 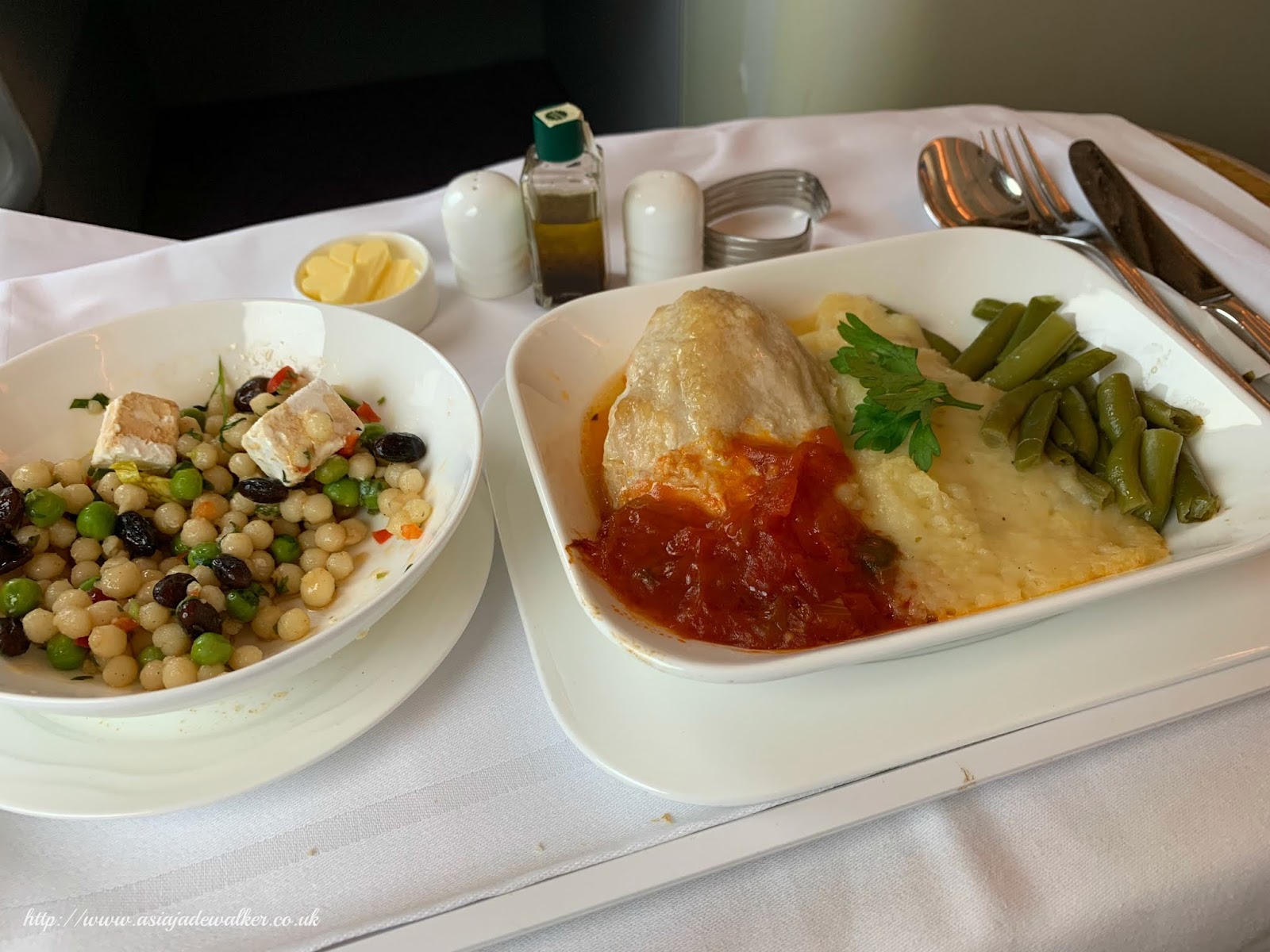 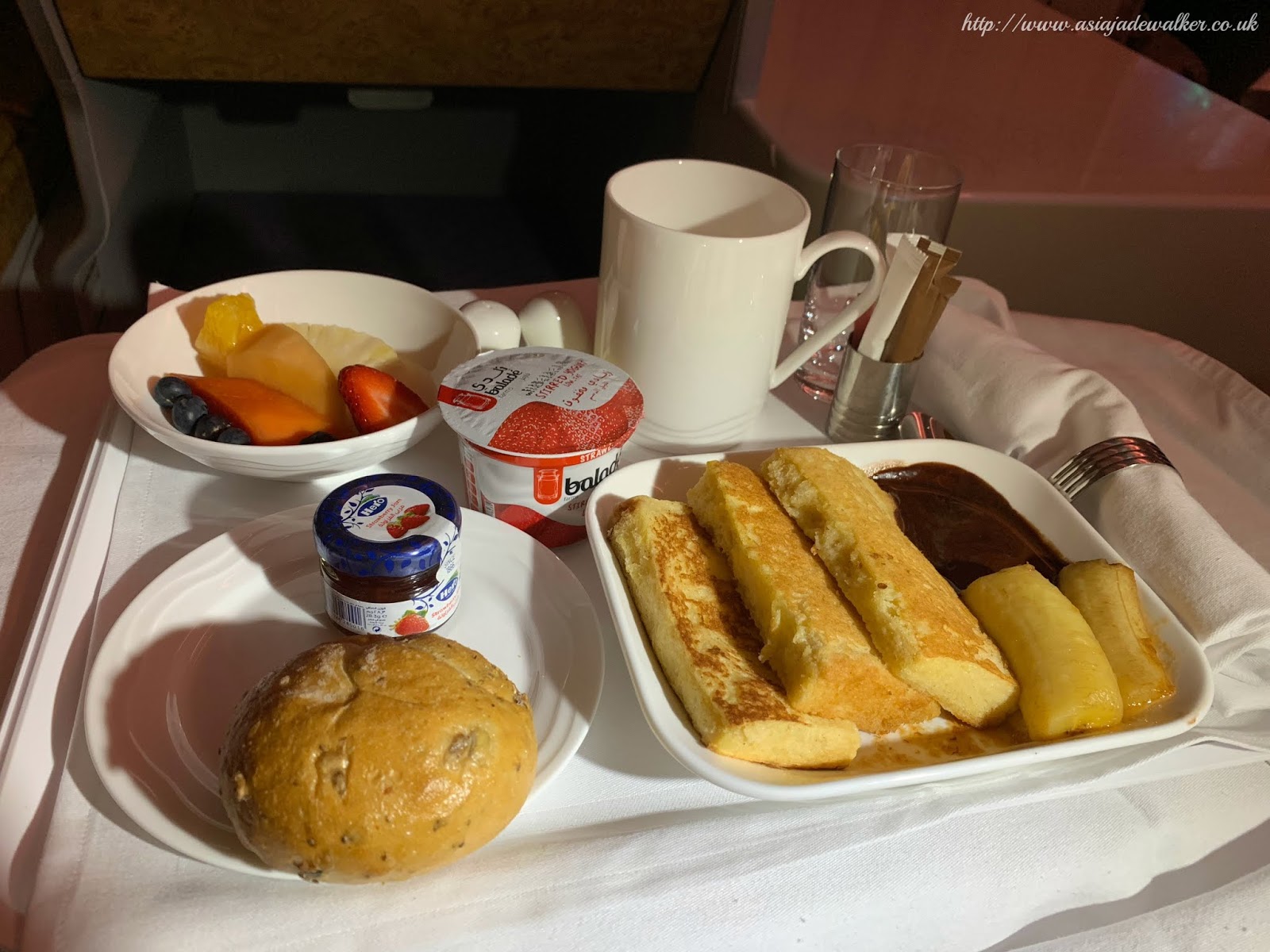 The next leg of my journey was from Dubai to Sydney which was around 18 hours of flying. I left Dubai at around 10am and I didn’t land in Sydney until the next day. As this flight was so long it meant that I had dinner & breakfast. For my dinner, I had shrimp again and then a chicken dinner dish. I decided not to have a dessert as I was really full and I didn’t want to order it and then waste it.

During the two flights, I managed to watch the second season of The Handmaids Tale which was amazing I highly recommend it! I also watched The Greatest Showman again as that is one of my favourite movies at the moment so I just had to watch it. I think I managed to get about four hours sleep on the whole flight as it’s so noisy and I can only really sleep in complete silence. I also kept needing to go to the toilet as I was drinking a lot of water to stay hydrated. I think also the excitement of it all meant that I found it hard to sleep as I just wanted to get there. 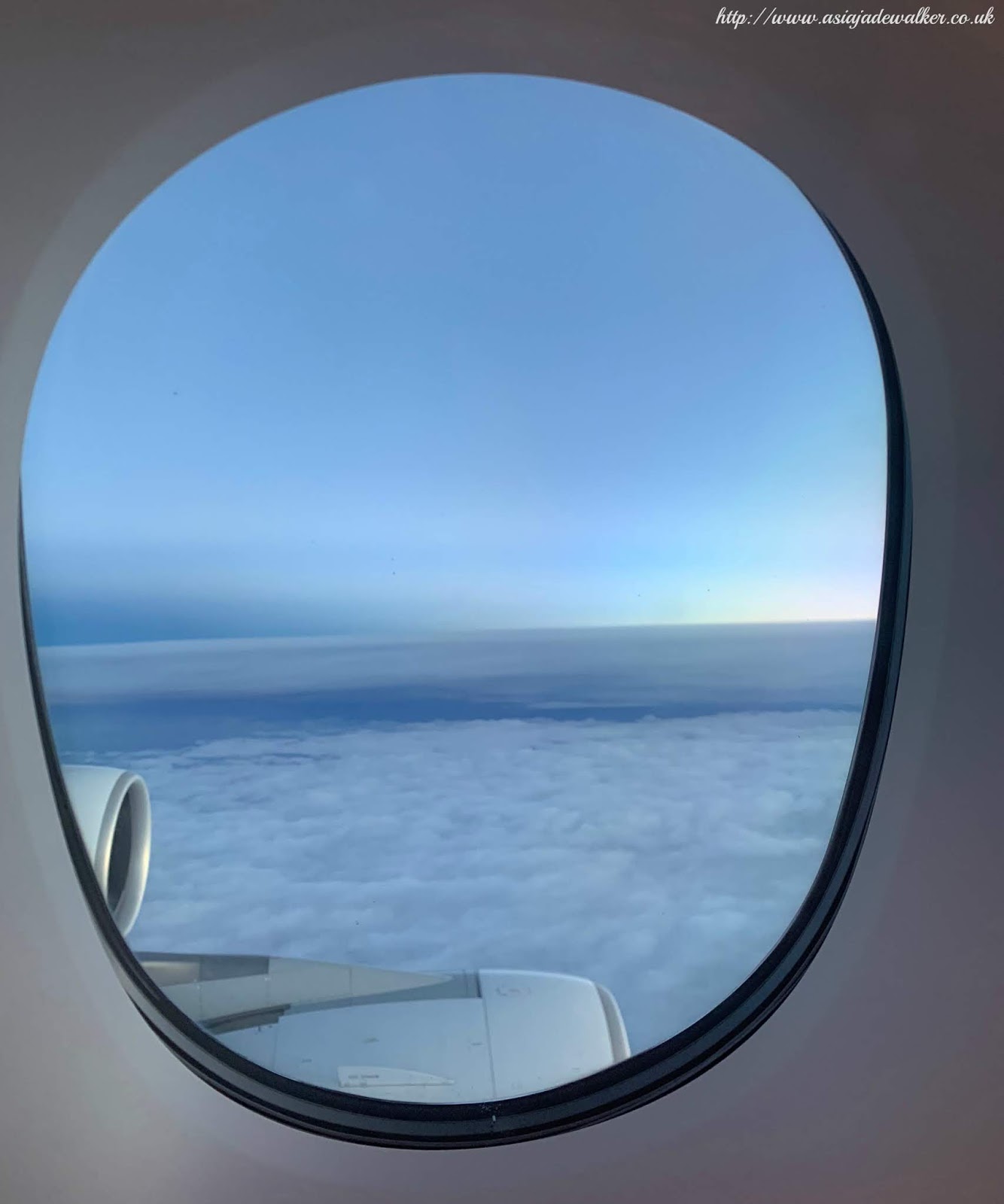 My last and final leg of the journey was a 3-hour flight from Sydney to Christchurch, New Zealand. I had about a 2-hour layover in Sydney which I wasn’t really a fan of as I was so exhausted by then I just wanted to get to my hotel and crash out. I eventually boarded my final flight and managed to watch a film or two on the final flight. I landed in Christchurch, at around 2pm on Wednesday 20th November which still blows my mind as it took me a day and a half to travel there.

I absolutely loved the whole flying experience as all of the Emirates staff were amazing and really looked after me as it was such a long way to travel all by myself. I think I’m going to leave this blog post here as it’s already soo long and I will start my next blog post from when I land in Christchurch as there are still some things I did once I had landed before the day ended.